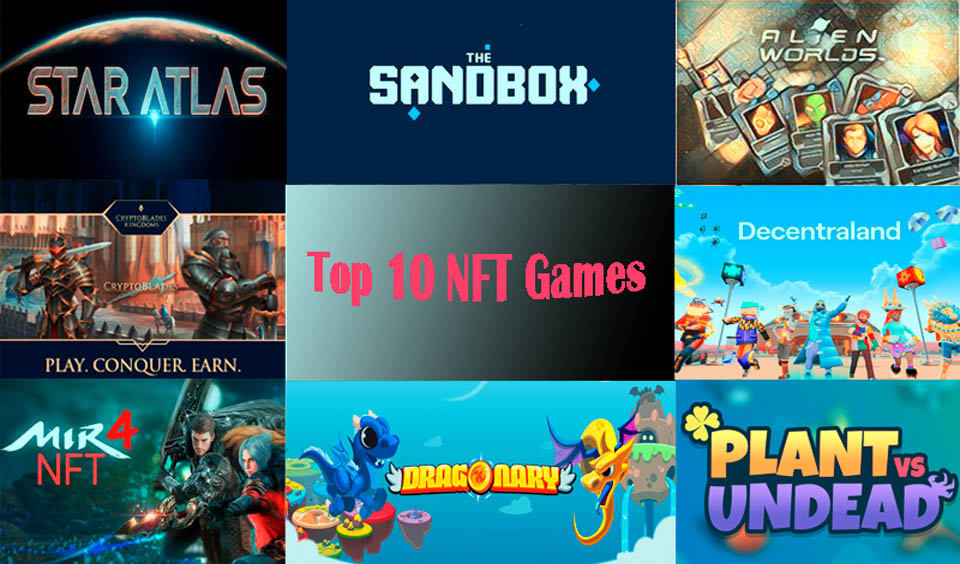 There are dozens of NFT games in the market that players can explore. Some NFT games require an initial investment, which involves buying in-game assets while some are free to play. Here are the top ten NFT games that you can play and earn from.

Taking the lead is Axie Infinity. It is a pokemon-themed game built on the Ethereum blockchain. It involves players competing on the battlefield to win rewards. Axie Infinity has two game modes, which are Arena Mode (PvP) and Adventure Mode (PvE).

Players earn SLP and AXS tokens from playing the game. Holders of these tokens can trade them in the marketplace to receive financial gain or in-game pets and collectibles.

Inspired by Plants vs. Zombie, Plant vs. Undead features a Tower Defense gameplay. Players earn rewards by raising epic plants to defend hordes of mindless monsters. The game delivers high-level entertainment with a catch – an opportunity to earn financial rewards. Players can earn by being a garden owners or a gardener that grow trees to scare crows away.

MIR4 is an MMORPG game that features an open world where gamers can select classes to explore the stunning terrain and battle against dangerous enemies.

The game has an in-game marketplace that lets players trade in-game collectibles and characters with the in-game digital currency $DRACO. Players can also farm Darksteel and convert it to DRACO, which can later be used to earn profit from the game.

This is another game that is gaining popularity among gamers. It features an RPG mechanism where gamers control a fictional avatar to take on missions against enemies. CryptoBlades uses the $SKILL token as the in-game currency and primary reward. Players can trade it for other cryptos or change it to Fiat money.

Combining Ethereum Blockchain and Metaverse concepts, Decentraland is one of the high rising NFT-based games that allow players to explore a virtual world. Gamers can mint avatars and build empires on virtual plots of land.

Owning a piece of land allows players to set up NFT-related events, such as NFT clubs NFT Arts, and exhibitions. Decentraland uses MANA tokens as its utility token for every in-game transaction in its marketplace.

This game platform offers the player the opportunity for role play. Wanaka Farm is an NFT game that lets players live their upcountry dream in a virtual world where they can plant seeds, raise pets, and harvest crops. The game is powered by BSC.

All in-game tools and crops are NFT items that players can trade in the marketplace. The in-game currencies on the game platform are WANA and WAI. WANA is the primary utility token and players can use it to purchase in-game collectibles and exercise voting rights in the ecosystem.

This is a free-to-play NFT-based game that lets players explore asteroids and mine the same for resources. They can also seize the power of territories. The gameplay deploys a spaceship for the completion of missions. Players can engage in space battles to earn the TLM token. The token serves as an incentive for gamers, which they can convert into other cryptos in the marketplace.

This is an AAA-quality NFT game that offers an immersive experience where gamers can view cinematic visuals as they explore time-traveling into the futuristic era. Players have the opportunity to become galactic citizens and choose their respective careers.

Gamers can mine, sell, and maintain NFTs. There are two in-game currencies used in the game, which are POLIS and ATLAS.

This is another popular play-to-earn NFT game that allows players to monetize their content. Players only need to acquire a LAND in The Sandbox to explore numerous possibilities that the platform offers. Gamers can generate NFT assets in different ways, including vehicles, pets, arts, and more. The game platform uses SAND as its in-game currency that players can stake and earn rewards from it.

Dragonary is another free-to-play and play-to-earn game metaverse that is themed around Chinese culture. Players have access to seven types of dragons that can constitute their army. Gamers have to develop army strategies and take on opponents on the battlefield to earn rewards. The platform uses VYT as the in-game utility token that can earn players real value.

NFT gaming is the new kid on the block. It offers players the opportunity to play to earn. That means instead of playing games just for entertainment, gamers can also enjoy some rewards, which they can convert to crypto or fiat currency.