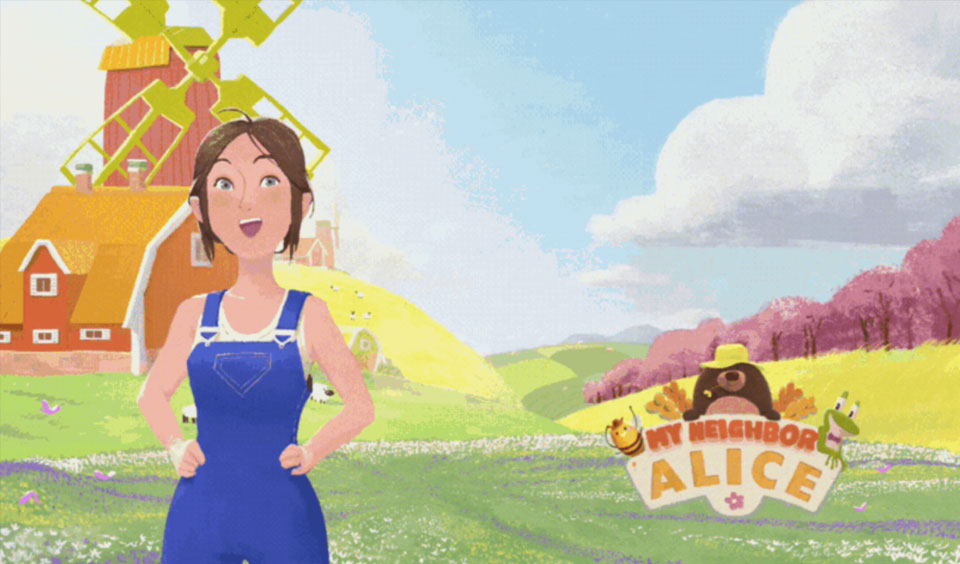 My Neighbor Alice is a multiplayer blockchain game with a building theme that results in a play-to-earn cryptocurrency-based game. The game shapes around owning virtual lands that can become valuable and traded as NFTs. As the implies, players can farm in this game and improve their collections.

Buying and owning virtual lands and islands, collecting and building items, and meeting other players are some of the game modes in My Neighbor Alice.

This blockchain game offers a similar experience to gamers. It somehow looks like the successful Animal Crossing game. Regular gamers can enjoy the normal experience of the game, which is about farming and collecting items, while crypto enthusiasts can benefit from NFT collecting and trading opportunities.

Because of the familiar and interesting theme, My Neighbor Alice can become a very useful attraction for millions of users to join the blockchain sector.

What is My Neighbor Alice?

My Neighbor Alice is a multiplayer game with a farming and collecting theme. It uses blockchain technology as the backbone of networking features and offers a play-to-earn concept as well as NFT trading. Players can own lands in this game and build on them. There will be about 100,000 pieces of land in this game that are distributed across six islands.

The game relies on the ALICE token that is used for purchasing lands, items, and other things. The lands will be sold in NFT, and there is a lottery for winning the first lands, too.

The team behind My Neighbor Alice has been successful in partnering with numerous organizations in the blockchain sector. Some of the famous entities like Maker, Ankr, and SandBox are partners of the game.

This multiplayer game offers various features for players to enjoy the decentralized virtual world. The features shape a comprehensive experience with numerous chances to progress in the game and even earn cryptocurrencies.

Every player can own and manage a character in the game and improve it. These characters are avatars that represent the player in the game. Players interact with each other using these avatars. Avatars can be improved and expand abilities in the game. Modifying the avatars is available through different assets that can be bought in the game.

As mentioned above, lands are the main properties in the game. Players purchase lands from Alice (the main character of the game) or in marketplaces. The lands are in the form of NFT and are the main components for farming.

There are many other in-game assets next to avatars and land in the My Neighbor Alice game. The assets can be deployed in the game and other assets for various reasons. They’re tradable in the marketplace, too. Houses, animals, vegetables, decorations, and cosmetics are some of the in-game assets in this game.

Financial incentives are crucial designs in games like My Neighbor, Alice. There are many methods designed in this game to offer financial opportunities and, therefore, the play-to-earn concept in the game.

In simple terms, more commitment and motivation in the game results in more financial outcomes for players. Some of the financial components of the game are:

The game is designed somehow to reward players for holding their tokens in wallets. There is a staking and reward program in the game that distributes some of the tokens between stakers. The staking yield program helps the game incentivize users to hold their tokens in the initial steps. While other parts of the game are under development, more holdings help the team develop those parts faster and easier.

There is a unique system in the My Neighbor Alice game for buying NFT from the system. It lets the user sell the bought NFT back to the system. According to the official website:

“When a user buys NFT from the system, a percentage of the purchase price goes into a special collateral account associated with NFT. The user then has an option to sell it back to the system (i.e., destroy the NFT) for the price equivalent to the locked collateral (or a percentage of it).”

Using lands isn’t limited to those who own their NFTs. The NFT system in the game is designed somehow that users can rent their NFTs to others. As a result, lands can be rented for various use-cases.

ALICE is the native token of the My Neighbor Alice game. It has numerous use-cases, among which paying for in-game assets is the most important one. Users can also lock their ALICE tokens to participate in land lotteries.

Players can use ALICE tokens to buy in-game assets, lands, and other elements. For example, you can spend ALICE and buy cosmetics for your avatar and change it. As mentioned above, you can stake the holdings to earn rewards, too. It’s designed to encourage players to hold their ALICE tokens more.

There are many opportunities to earn ALICE in the My Neighbor Alice. The play-to-earn concept makes it possible to add to your holdings by playing more. There are numerous events and competitions in the game that reward the players with ALICE tokens.

Decentralized governance is the other use case for the ALICE token. Holders can participate in decisions around the platform and even propose changes. Proposals are mostly about the use of revenues, game development, and growth.

Antler Interactive is the game studio behind the My Neighbor Alice game. It has many more games like Krystopia, Krystal Kart AR, Kartong, and SVRVIVE.

The studio focused on new kinds of games like blockchain-based ones that bring newer technology to the gaming world. Located in central Stockholm, Sweden, this game-studio has a considerable background in the VR sector. It aims to offer new ways of playing games with innovative features.

My Neighbor Alice has a fantastic fantasy theme that can attract many users to the blockchain world. It’s interesting for those who like the multiplayer building games and also those who look for in-game NFTs.

With numerous reward methods and earning mechanisms, it can become the first choice for many new players looking for play-to-earn games.