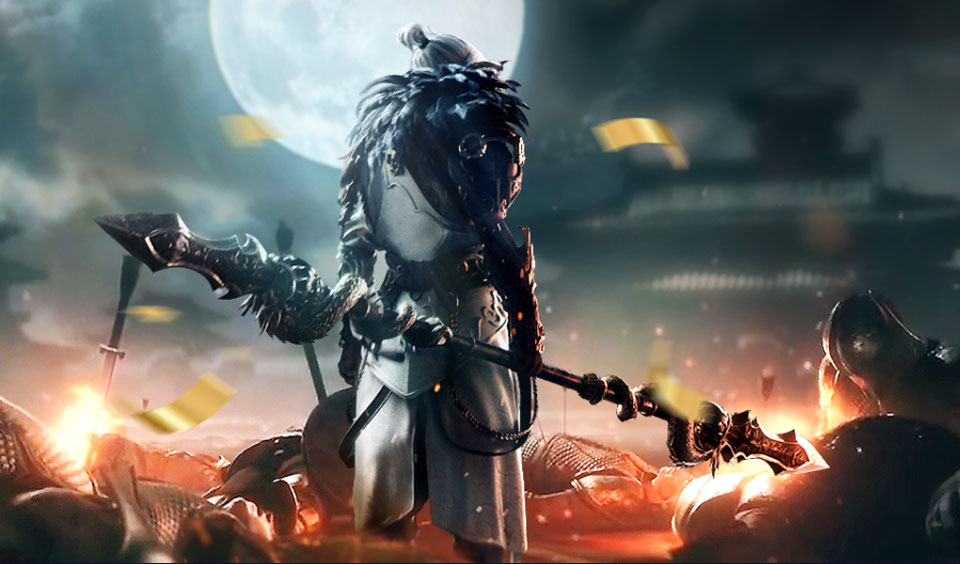 Mir4 is an MMORPG play-to-earn game that leverages blockchain and cryptocurrency concepts as added benefits to users. It has an open-world theme with familiar designs for characters and battles.

The designs and concepts in Mir4 are familiar and attractive for those who have played east-Asian games. The characters fight with swords and magic powers. Many experts believe Mir4 is one of the best combinations of traditional video gaming with the blockchain world. It offers a familiar experience next to the earning opportunity thanks to numerous system designs, including NFTs.

Mir4 is a free-to-play, play-to-earn game categorized in the MMORPG group. With familiar concerts and designs of fighting and exploring, it offers the experience of battling, exploring, mining, and earning in the game. There are lots of opportunities to progress and earn cryptocurrencies in this game.

Besides, the NFT system with the built-in marketplace lets users earn more from their in-game assets.

The game has the familiar concepts of battling and classes present in almost every RPG game. You choose your character class and improve it with battling, exploring, and etc. Fighting with other players and earning tokens is an important part of the game that makes it similar to other online multiplayer games.

One of the most important benefits of Mir4 compared to other play-to-earn games is that it can be played in almost every system. You can download and play it on Windows, Mac, Steam, Android, and iOS. Click on the links below to download the game:

The availability of the game on almost every platform makes it a very good choice for hardcore gamers. They can start their journey in the game on one platform and continue it on other ones. In a nutshell, you can play Mir4 anytime, anywhere.

Many of the current blockchain games and even traditional video games don’t offer this availability and are limited to some platforms.

Players can enjoy this game on common devices, desktop or mobile. In simple terms, new computers and mobile phones in the market are suitable for playing Mir4, and there is no need to have flagship devices. You can see the full list of system requirements below.

Especially in mobile devices, there is no need to have expensive phones. Even with an iPhone 7 or any Android device with 4GB of ram, you can play this game.

The Cycle of life in MIR4

Mir4 offers various opportunities and methods in the gameplay to experience the open-world theme. Players gave numerous opportunities to improve their characters and find new chances of winning tokens.

Battles in Mir4 aren’t limited to fights with other players. There are many monsters in this open-world game that players should face and defeat for progressing in the game. When a monster is defeated in the hunting mode, players earn EXP and valuable crafting materials. These bonuses can be used for purchasing in-game assets or the native token of the game.

Crafting and enhancing equipment is one of the most important actions in RPG games. You have a limited number of weapons and other in-game assets. They should improve during the game to offer more chances of winning. Improving these assets or building new ones needs material. In Mir4, you can find materials needed for crafting and enhancing with mining. The character explores the world and spends time finding or extracting the ore.

Mining materials isn’t the only path to find valuable ingredients in the game. You can gather herbs and plants to have more materials in this game, too. The action is done by cultivating plants that give you valuable material. The material from the gathering is used for increasing Constitution ranks in Mir4, which is one of the most crucial ranks for character progress.

Players can improve and enhance their characters not only with battles and bonuses but also with meditating. This kind of improvement is vital for having a character with comprehensive abilities. With meditating, players draw the earth’s energy. This energy results in increased inner force and improved skill ranks.

There are many features in this MMORPG game that make it interesting and attractive. Numerous game modes with fantastic abilities for characters give a great experience to players.

Oriental movement is familiar for those who love Asian action movies. This type of movement is common in fights and is very similar to high jumps or even flying. Characters in Mir4 can perform oriental movements for traveling between places or while fighting.

As mentioned above, there are many monsters in the game that should be defeated for extra earnings. Players can fight boss monsters in a group and defeat them for a chance to win a treasure chest. After the king monster is defeated, players choose one team member to open the treasure chest. It takes 30 seconds to open the chest. While the player is opening the chest, team members should protect the operation because other teams can begin a fight for the treasure.

If a new team defeats the old team that has found the chest, they need 30 seconds to open it, too. As a result, this 30 second time limit may continue for a long time because new teams always come to claim the treasure.

There is an AI algorithm in the game called a fraud detection system that protects the exchange market in the game. The exchange market is the basis of economic operations in Mir4 for buying and selling in-game assets and improving the clans. The AI algorithm checks the trades in the market and finds abusers. The items being bought or sold with fraud will be automatically removed by the algorithm. Especially, abusive bots will be found easily with this system.

Players can summon spirits during the game and have them beside the main characters in almost every experience. Spirits live in the spirit village and always are looking for warriors who help them stop the chaos in the in-game world. They have exclusive abilities and skills that are useful for helping the main characters. Spirit skills can help warriors in growth or in battles.

Each warrior can have up to five spirits to help in the adventure. There should be a chief spirit that is always by the character’s side in every adventure. Spirits grow in the game with the treasures found in chests. As the spirit grows and becomes more powerful, the warrior will be stronger, too.

Mir4 has a slogan for the game that says:

“from my battle to our war. A world beyond that can only truly be experienced together”.

It means the game is designed to encourage players to work together in experiencing the world, including battles and explorations. Players can create and improve clans with the help of each other.

They can declare wars to other clans and find rewards for their won battles. They can even find hidden valleys together and start earning more rewards from them.

They can choose monopoly and defend the valley while getting tax from Darksteel miners, or they can choose coexistence that makes the valley free to explore for everyone and has its special benefits. If the valley is owned in monopoly mode, it should be denied against other clans that attack once a week and sometimes unite with each other.

Bicheon castle is the main castle in Mir4. There is always one army that lives in and protects the castle. Clans can unite with each other and attack this castle in a battle that results in a new ruler of Mir4 land or the last ruler continuing the mission.

Players earn experience and skills when playing Mir4. They progress and enhance their characters by winning battles, exploring new hidden lands, and many more actions. They result in more chances to craft items and treasures and become more powerful. In a nutshell, the time being spent in the game won’t be with no reward.

As an RPG game, Mir4 offers many classes for players to choose from for their characters. Each class has unique abilities and skills and can determine the path of the game for the player.

As the name implies, this class is a good fighter and can defeat enemies more easily using the handles greatsword. This class is always the leader in battles. Players who choose this class will have a strong armor equipped with their character in beetles.

This class is a magician that fights with others using magic powers. The power inside in-game elements provides the needed magic in fights. A sorcerer can fight well individually but becomes stronger when allies protect her in battles.

She is a kind of magician, too. But the magic is mostly used to help others and craft swords. A Taoist can recover well in battles. It helps her overcome battles and difficulties more easily.

Lancer is another kind of warrior in Mir4. he has the ability to fight with a long spear. Simultaneous attacking and defending skills are the biggest benefits of this class.

The newest class introduced in Mir4 is named Arbalist. She is a hunter with the ability to shoot enemies or monsters from a distance using an arbalest. She can rain down a deadly shower of arrows while moving fast, tracking enemies, or fleeing from them.

DRACO is introduced with Mir4 but with use-cases in many online games.

“DRACO is a coin with a new concept to allow in-game assets to be freely exchanged, stored, sold, and purchased outside of the game.”

As mentioned above, players find and gather Darksteel in their experience. They can trade (smelt) it with DRACO coins with a unique exchange rate. DERBY stands for Daily Exchange Rate By Yield and is the exchange rate for this trade. The formula for calculating DERBY is Fixed (100,000 Darksteel) + the Yield (total cumulative Darksteel mined up to the day before the exchange).

Players can mint their characters if they’re above level 60 and has a 100,000 Power Score. It creates an NFT from that character that can still be played with. New progress will be updated to the NFT, too. If the owner plans to trade the NFT, it should be sealed to be supported in exchanges. Sealed characters can’t be played anymore and are linked to the user’s Wemix wallet. But the user can unseal the character later and play with it again.

Wemade is a gaming company with considerable experience in video games and especially online games. The company owns and develops the Mir IP and has been successful in attracting more than 500 million players in China. Wemade Tree is a subsidiary of this company that focuses on blockchain games like Mir4.

WEMIX is the blockchain backbone for the blockchain games of the Wemir group. It offers the opportunity to trading, mint NFTs, and hold digital assets. There is a WEMIX exchange for trading assets of games like Mir4 and also a wallet for holding cryptocurrency or NFTs. WEMIX token is a token of this group that is used for trading game assets.

Mir4 is a play-to-earn blockchain game that combines the concepts of traditional attractive video games with the opportunity of earning cryptocurrency while playing games. It has numerous opportunities for players loving traditional RPG games or looking for new ways to earn crypto. Because of the massive user base thanks to the previous versions of Mir, the blockchain version can become successful in expanding fast and becoming a great option for blockchain game lovers.