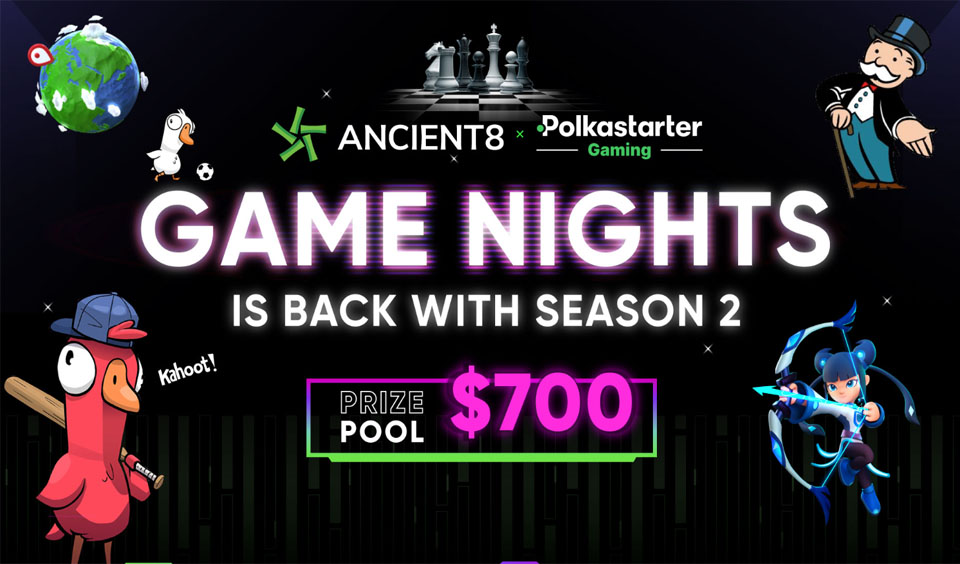 Ancient8, an infrastructure developer for GameFi, collaborates with Polkastarter, a blockchain gaming platform, to launch the Ancient8 Game Night Season 2. Interested participants can compete in different games each night for a chance to win from the reward pool of $700.

The timeline for the event starts today, September 12, to October 12, when the platform releases the Game Night Series and The Best Host Voting Poll results.

Hi Frens! We're hype to announce our Discord Game Night Season 2, this time in collaboration with our awesome guild mates at @PolkastarterGG!💚

Compete in different games nightly for a chance to win rewards from the $700 Prize Pool!🎮

Highlights of the Game Night Season 2

Following the successful completion of the Ancient8 Game Night series, the platform is motivated to continue encouraging its community to lead in community initiatives. Therefore, it will sponsor at least eight more Game Nights for Season 2 of the event.

Ancient8 is collaborating with Polkastarter Gaming Guild to manage the game night series. The event will hold on both Polkastarter and Ancient8 Discord servers. It promises to be fun and exciting as both communities will have the opportunity to connect and interact on each other’s Discord.

How to Apply for the Ancient8 Game Night Season 2

Ancient8 and Polkastarter will open a Google form on their Discord servers for interested participants to apply. Participants can host one out of 8 game nights.

Following this, both platforms will review and choose eight outstanding game night proposals and select four from each community to officially host the game. Ancient8 reveals it tripled the rewards for each game night for Season 2, and each official Game Night Host will get a $60 sponsored by Polkastarter and Ancient8.

Apart from hosting, the hosts are responsible for moderating in English and choosing top winners for their game event. Like the first season, Season 2 will also showcase a Best Game Night Host competition with higher rewards. The top 2 Best Hosts will share a prize pool of $200, 30,000 BBP, and 30,000 PGG.

How to Register to Host a Game Night Event