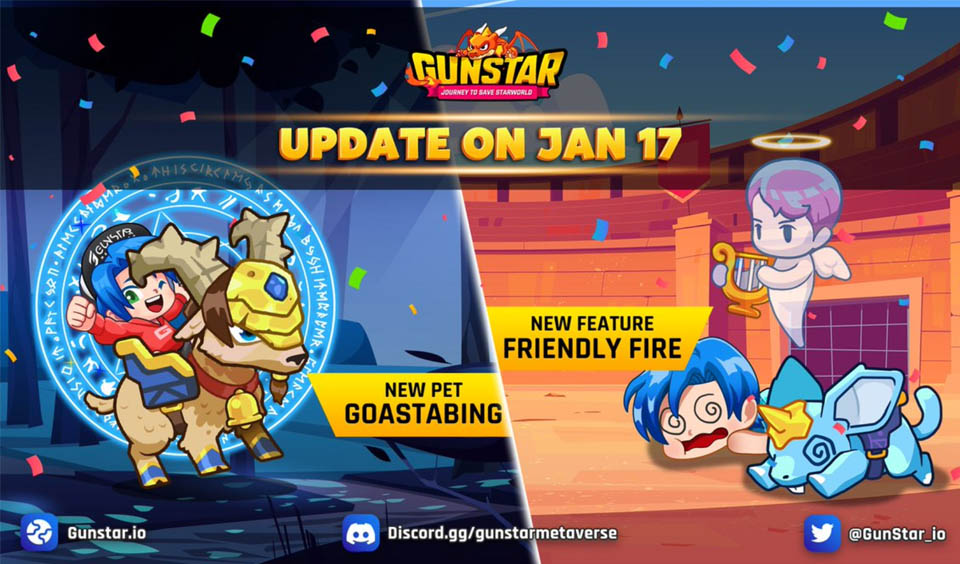 The turn-based artillery game, Gunstar Metaverse, has released a new update with new features, which are Friendly Fire and New Pet – GOATSTABING.

According to the game platform, it is ready for 2023 with several explosive updates to deliver a better gaming experience. Gunstar Metaverse has announced that these new features will take effect from January 17.

Highlights of the new Pet –GOATSTABING

The new Pet –GOATSTABING feature comes with an eye-catching experience with exceptional shimmering effects and powerful skills. These will dazzle players with surprising uniqueness. Players can ride the new pet into battle and salvage the Star World.

What is the GOATSTABING feature? Goatstabing is a powerful tool for team battles. It is passive, but with creativity, you can position it to maximize its utility. The passive skill is 20% Buff damage for all the allies’ skills close to him.

It has three distinct skills apart from the passive skills and each has a different damage capacity. The first skill fires only one magic ball with no other effects. The minimum damage of this skill is 75, and the maximum is 102.

The second fires one exploding ball and causes damage on the initial hit before exploding. It deals extra damage to all the enemies in the AoE. This skill has a minimum damage of 150 and a maximum of 208.

The third skill fires one magic ball and deals massive damage to a target. It also possesses a deal bonus damage to target featuring higher maximum HP. The minimum damage caused by this skill is 500, and the maximum is 770.

Highlights of the Friendly Fire Feature

This feature helps gamers to create more strategy and more fun. It lets you watch out for both your enemies and teammates. The feature applies to all game modes except the PvE game mode. With this feature, gamers can shoot themselves, which is referred to as suicide.

Also, when damage is dealt to a player, this feature reduces it by 50%. It is worth mentioning that it applies to all three skills.

Gunstar Metaverse also mentioned that it performed bug fixing and game server improvement. The platform advised gamers to watch out for more updates through its social media platforms.