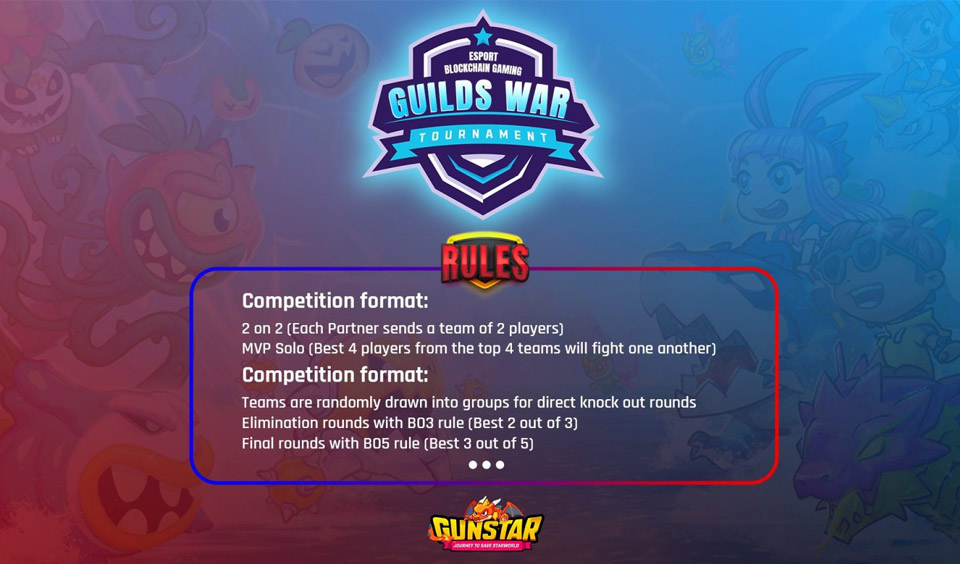 The turn-based artillery game, Gunstar Metaverse, has released the details of its Guilds War Tournament format. The game platform mentioned it is organizing this Esports tournament to provide a healthy and rewarding playground for all players.

The tournament adopts the league to create a consistent and engaged community of gamers. The goal of the tournament is to bring survival fighting skills and professionalism into StarWorld to the global players.

🎉 Reveals the format of #GuildsWarTournament

What is the Guilds War Tournament Event all about?

Launched by Gunstar, the Guilds War Tournament is the first Esports gaming event on the blockchain. It is created as a global playground for Guilds looking for a better gaming experience with exciting rewards. The event will start on December 5, and participants will have a chance to demonstrate their gaming skills.

The total prize pool for the event is $3000 BUSD with the winning team receiving a reward of $1200 BUSD. The winning MVP Solo will also win $500 BUSD. The event will take place online at StarWorld and live-streamed on Facebook and Discord Server.

Highlights of the Competition Format

According to Gunstar Metaverse, after the completion of the participation process, each team will select two of their strongest gamers to compete with other teams. The game platform will randomly draw the teams to participate in the knockout match.

It further revealed it will select the best Solo MVP from the four best players from the top one to the top four teams to go head-to-head against each other for the grand prize. According to the BO3 principle, the qualifiers in the tournament are players who play three rounds and win two rounds.

The player in this category will win the game. The game will also base its final round on the BO5 principle where the player who plays five rounds and wins three rounds wins. Gunstar Metaverse has revealed that Esports lovers are familiar with this competition genre.

As the opening of the Guilds War Tournament draws closer, the game platform would like interested participants to stay tuned as they look forward to the event.

What to Know about Gunstar Metaverse

Gunstar Metaverse is a multi-player RPG and turn-based strategy NFT-based game. It offers players real value in gaming excitement and enjoyment. It provides this real value through blockchain technology.

How to Buy Sweatcoin NFTs