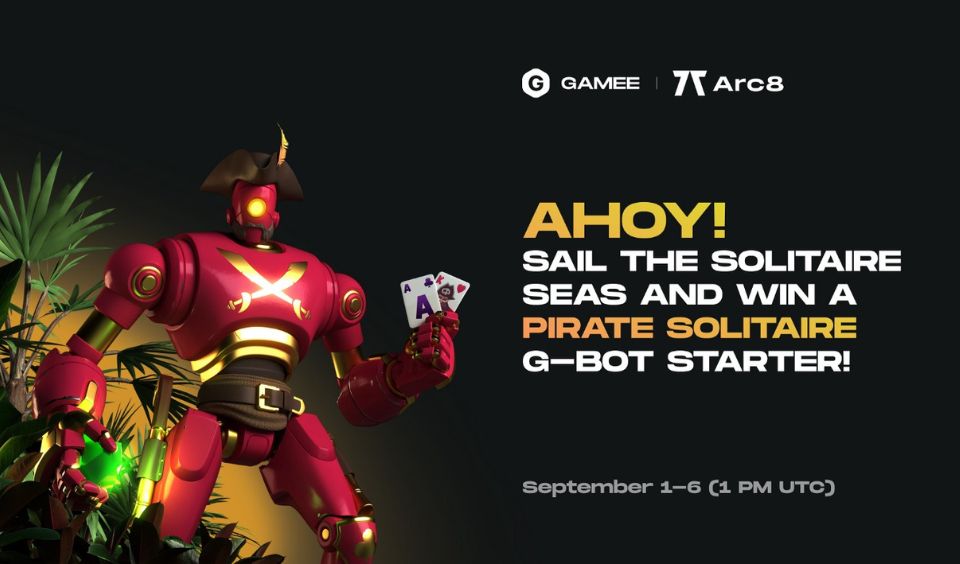 Earlier, GAMEE offered players the opportunity to get G-bots by trying Dark Lords from the 25th to the 29th of August. Following the end of that contest, the team distributed Hero and Villain bots to the winners. Sequel to that offering, the community have another opportunity to earn from this gaming platform. Similarly, Pirate Solitaire will be available on Arc8 for a limited period.

Here’s the map ye’ll be needing🗺️⤵️https://t.co/mhKWoWyzXI

Details of the Solitaire Seas Debut on Arc8

Pirate Solitaire will be available on Arc8 on the 1st of September. This promotion will continue till the 6th of that same month. Over the period, players will compete for a chance to get the Limited Edition Pirate Solitaire G-Bot Starter NFT. This is a perfect addition to improve their decks and gain access to this cut-throat game. Moreover, this treasure is not available on any map.

To stand a chance, participants must score at least 500,000 points from matches. Those who make it above this mark will qualify for a draw that will take place after this exercise ends. There are 40 NFTs up for grabs to participants. Of this total, 10 will be given to the ten players with the highest scores. These class of users will not have to engage in any draw. Whereas those who meet the cut-off points will participate in a lottery to determine if they will get from the other 30 pieces. Regardless of the outcome, anyone who scores below the required components will not receive any compensation.

These Limited Edition NFTs have immense value and will allow you to play extra games on Arc8. As such, you can compete for even more payoffs outside those associated with this card game. You can choose to trade your earnings, keep them or use them to improve your inventory.

A few days after the event ends, the team will distribute the rewards to the winners. This includes direct recipients, and those from the draws. The Limited Edition Pirate Solitaire G-Bot Starter NFTs will be airdropped directly to the wallets linked to the account. Therefore, ensure that you link the preferred wallet to avoid losing your Solitaire Seas pass. Further announcements will be made on Arc8 Discord Server  and Twitter Account.