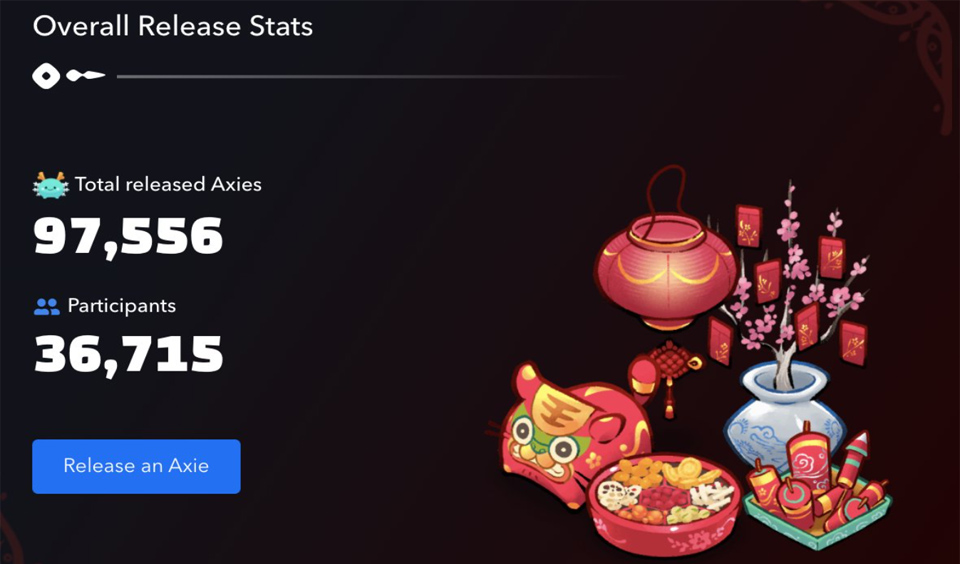 Axie Infinity, the renowned battle-collect-earn game platform, has announced through its official Twitter page that almost 100k Axies have been released in the ongoing Lunacian Express event.

It is of import to mention that the Lunacian Express event, which was organized to celebrate the Lunar New Year event, started on January 20, and it is expected to run until February 20, 2022.

In celebrating the event, members of the Axie community can release their Axies to Lunar Landing and in exchange, the Axie will send the owner a limited edition of land item and tickets to the legendary raffle. The event is still ongoing, which means interested participants can still join to participate.

How to Release an Axie

To release an Axie, you must first own one. If you already have Axies, simply visit Axie’s marketplace page on the official Axie Infinity website. A “Release” button has been added to the page. You can also get the link to release your Axie from the event website. So, click on the “Release an Axie” button.

You will be required to log in with the details of your Ronin wallet after which you will see a popup window. From here, you can select an Axie that you want to release. For everyone that releases an Axie, you are guaranteed a reward. You will get one of five different items earmarked for the event.

You will also get a ticket into three different raffles with each release you make. The items available that you may get for rewards include Assorted Firecrackers, Traditional Snack Box, Blossom Tree, Lucky Lantern, and Crimson Tiger. The Crimson Tiger is the rarest item on the list with a 1% off of getting it during the event.

Suffice to mention that these items are cosmetic artifacts, which players can show off on their virtual lands. These items will not offer bonuses to the player’s stats. It should also be noted that once you release an Axie, they will not return to you, which means you cannot play with it again.

Axie is a novel game that is partially operated and owned by players. It is a play-to-earn game where players earn $AXS tokens when they play. The tokens are in-game assets and also governance tokens, which can be used in deciding the future of the Axie game.