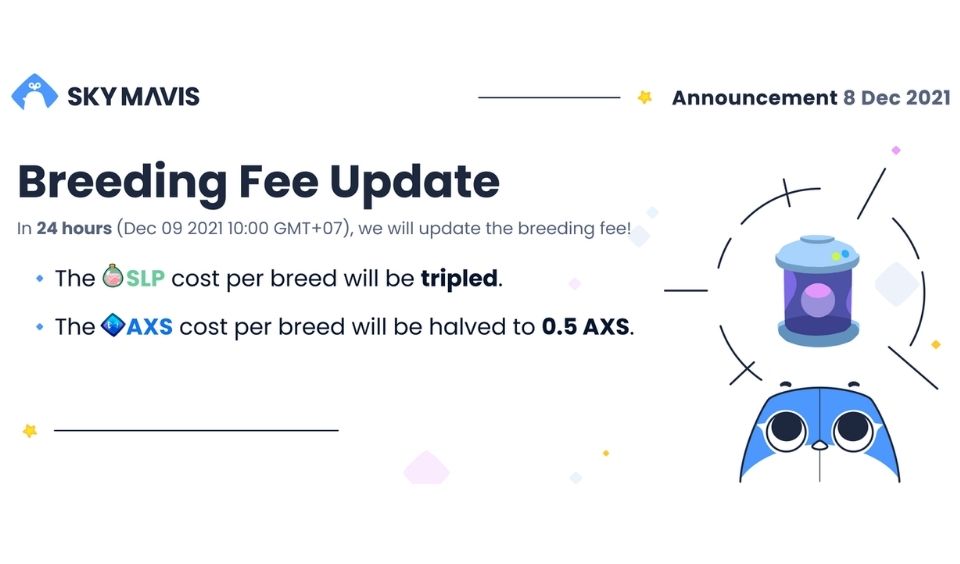 Axie Infinity has been away from the news for quite some time now. Save for the recent Creator Cup tournament, there has not been much of a news from this gaming outfit. This is besides the fact that the game has encountered a number of challenges.

Due to it play-to-earn feature, players have focused on earning, rather than playing the game. They were selling off SLPs and causing its price to drop in the marketplace. To curb this issue, Axie Infinity is set to adjust Axie breeding fees. Below are details of this press release.

Following this adjustment, it will cost three times the SLPs to breed Axies. On the other hand, the AXS cost per breed will be reduced to 0.5 AXS. The game also gave reasons for these changes.

Here are further details of these changes:

With its increase in players, the price of SLPs have become very volatile. One reason was that players were selling off the SLP they earned, instead of burning them to create more Axies.

By doing this, they were causing the prices of SLP to drop in the cryptocurrency marketplace. This led to confusion, worries and even frustrations for the game’s players. Players were feeling as though their consistent efforts were going down the drain.

While Axie Infinity wants to reward players for their immediate effort in playing the game, it goes beyond that. The game is more concerned about creating a sustainable economy that will serve in the long term.

It is also using this medium to appeal to its new players. Despite its play-to-earn feature, new gamers should not have unrealistic expectations for the game. There is a very important need to balance the game’s economy.

Reasons for these Changes

Axie Infinity believes that the price volatility is down to two major causes:

It believes that by reducing the amount of AXS needed for breeding Axies, it will encourage players to breed more in-game characters. Considering that Players need SLPs for breeding, they will be able to use more SLPs in breeding. This will stop Smooth Love Potions from flooding the marketplace.