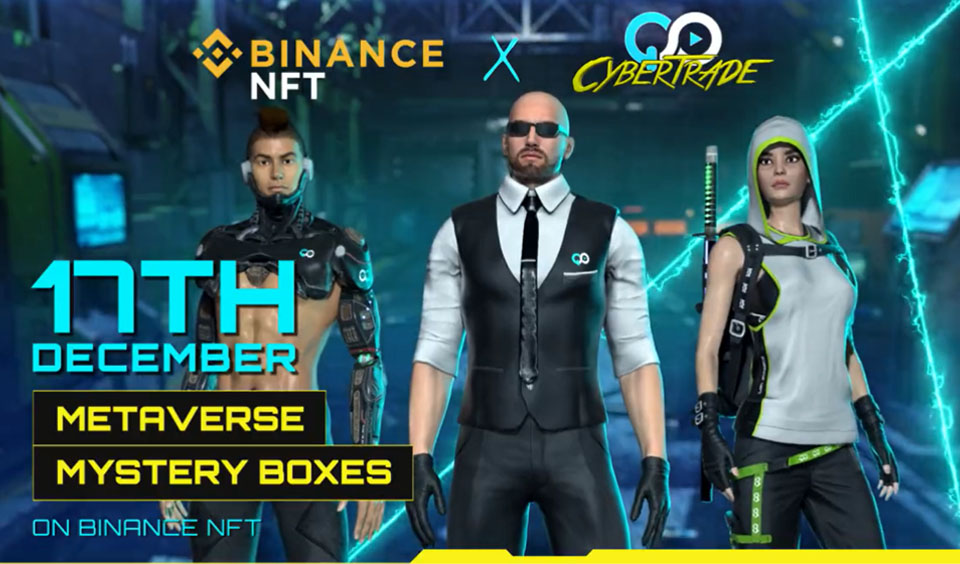 CyberTrade, an MMO RPG Futuristic Metaverse, is set to host an exclusive pre-sale of CyberTrade NFTs on December 17, 2021. The event is scheduled to take place at The Binance NFT Marketplace.

CyberTrade is a fast-rising MMO RPG futuristic play-to-earn metaverse game that uses non-fungible tokens in the forms of weapons, cars, avatars, and virtual lands. The event on December 17 would be the first time that the game platform would be releasing its exclusive mystery boxes to its members through the Binance NFT marketplace.

⚡️There will be 1000 pieces of #CyberTrade vehicles from total of 1500 pieces #Metaverse Mystery Boxes on 17th of December!

You know what you have to do. Join the illegal drag races, earn the $CCash and get the highest citizen ranking!👊

Details of the NFT Pre-sale Event

CyberTrade will hold a special NFT presale on December 17 with a total of 1,500 digital assets. According to the game platform, this sale offering would be a once-in-a-lifetime opportunity to own numerous super-rare, rare, and normal digital assets, before the game is launched.

The mystery boxes will be sold at 199 BUSD per box and there are a maximum of ten boxes that a single account can purchase.

Benefits of Participating in the NFT Presale Event

Users that purchase the in-game assets before others and before the game launches officially will gain access to numerous benefits. During the first public presale event, there will be 1000 normal NFT vehicles, 480 rare fighters, and 20 super-super-rare bosses.

Users will get to purchase some stunning-looking vehicles, such as F-1500 Aero, Futura SS, and Venom, among others. Owners of these vehicles can ride them through the streets and in drag races in the Metropolit.

Members of the community are also allowed to mint NFT to be rare and unique through the VRF technology from Chainlink. Holders of the NFT can also rub shoulders with powerful bosses in the Metropolit, including the King, who is the boss of all bosses, Cruella, and Optix.

The presale event is more than just being the first to obtain the NFTs. Participating in the presale event ensures you get your hands on extraordinary assets that will become more expensive as soon as the CyberTrade game goes live.

Highlights of the CyberTrade Game Token

The in-game currency for the CyberTrade game is the $CCASH. Holders of the mystery boxes will have the opportunity to play and earn $CCASH with their NFTs.

Holders of the $CCASH are genuine citizens of the Metropolit and they have the right to purchase lands, build structures, wear the Metropolit clothes, and drive the best cars on the street. There will be a total of 1,000,000,000 $CCASH tokens available and the first market cap will be less than a million dollars.