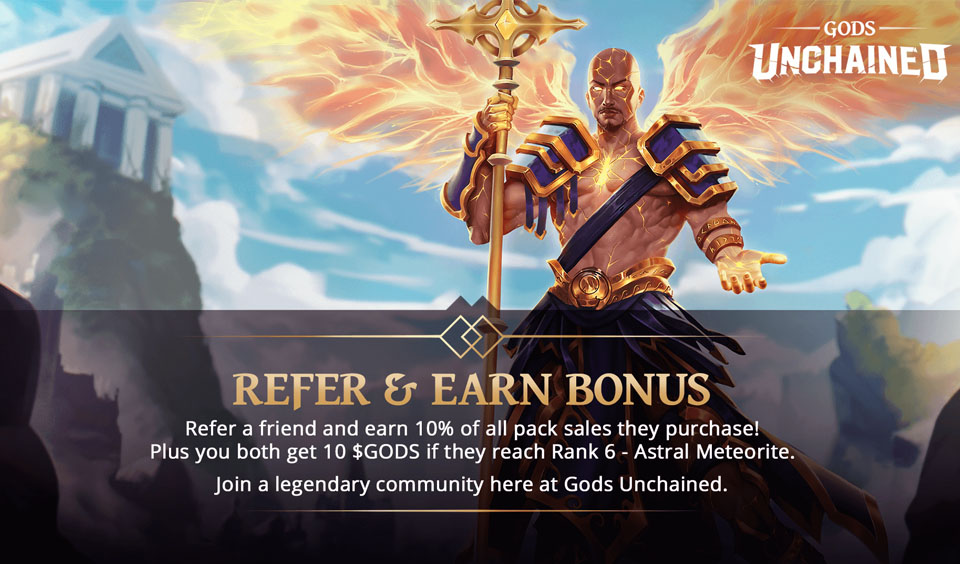 Following the success of its August Refer and Earn program, Gods Unchained has launched a new Refer & Earn program where players can refer a friend and earn 10% on all the pack sales the friend buys.

The trading card game powered by Immutable announced it is raising the bar higher this time around with attractive rewards. Gods Unchained is giving away one million $GODs to its community members who refer new people to the game platform through this program.

Apart from earning from the packs the referred friend buys, the game platform will also give both the referrer and referee 10 $GODs each if the friend attains Rank 6. The event, which has launched will end on October 12 at 11:59 pm UTC.

How to Participate in the Gods Unchained Refer & Earn Program

Each user of the gaming platform has a unique code. All you have to do to participate in this event is to send your code to your friends. You can send the code to invite as many friends as you can to increase your earnings.

To qualify for the earnings, your friend must create a Gods Unchained account using your code. When they purchase any Pack, you will earn a 10% bonus on their purchase.

Also, when they attain Rank 6 of Astral Meteorite, you and the friend will receive 10 $GODs each. Gods Unchained has revealed there is no upper limit to your earnings, which means the more people you invite, the higher the earnings you can get.

When will you receive the Referral Rewards?

The game platform emphasized it will base the calculation of the rewards on the average daily conversion of USD to $GODS during the promotion’s period.

Gods Unchained reiterates that multi-accounting and bots are against its Terms of Service. The team went further to state it will ban any culprit found to flout this term of service.