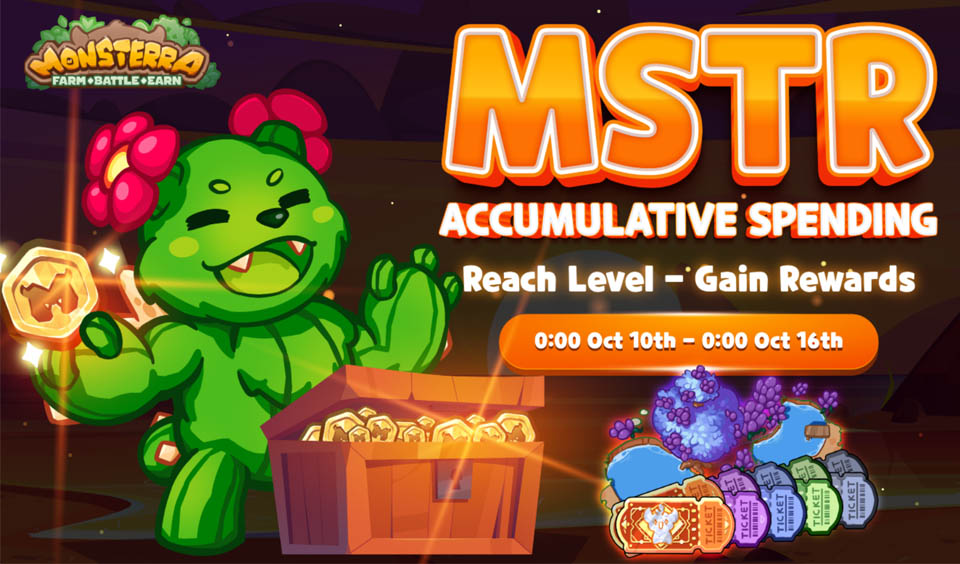 Monsterra Game, a multi-chain NFT-based game platform, has launched its MSTR Accumulative Spending campaign. The campaign offers players the opportunity to earn more rewards as they spend more MSTR. The campaign runs from October 10 to October 16, 2022.

According to the game platform, participating players can earn big in the Monsterra MSTR Accumulative Spending and Top Ten MSTR Spenders Campaign. The more rewards users earn during this campaign, the more advantages they have to generate more earnings in the future.

💰#Monsterra #MSTR Spending Is In The Town🎁

How to Participate in the $MSTR Accumulative Spending Campaign

As mentioned, this event will run from October 10 to October 16, 2022. Users who spend MSTR in the Monsterra game will attain reward milestones in in-game asset rewards and tickets. The spending covers the conversion fee, breeding fee, and unlock fee.

The spending level of each user will determine their rewards. Users will have the chance to earn tickets to join the Monsterra Lucky Draw event. Players with more tickets have better chances of winning. Apart from the tickets, players can also earn in-game items, which they can use in the game activities to build up the realm and power up Mongen squads.

Highlights of the Reward Structure

You will earn rewards based on the number of MSTR you spend. The highlights of the different reward levels are enumerated as follows:

This event will run concurrently with the MSTR Accumulative Spending campaign. Players who spend a minimum of 1200 MSTR can join the leaderboard of the top 10 MSTR spenders. Users on the leaderboard will receive unique limited rewards.

Like the accumulative spending campaign, the more MSTR you spend, the higher the valuable rewards you receive. Here is the highlight of the reward structure for the Top 10 MSTR Spending Campaign.