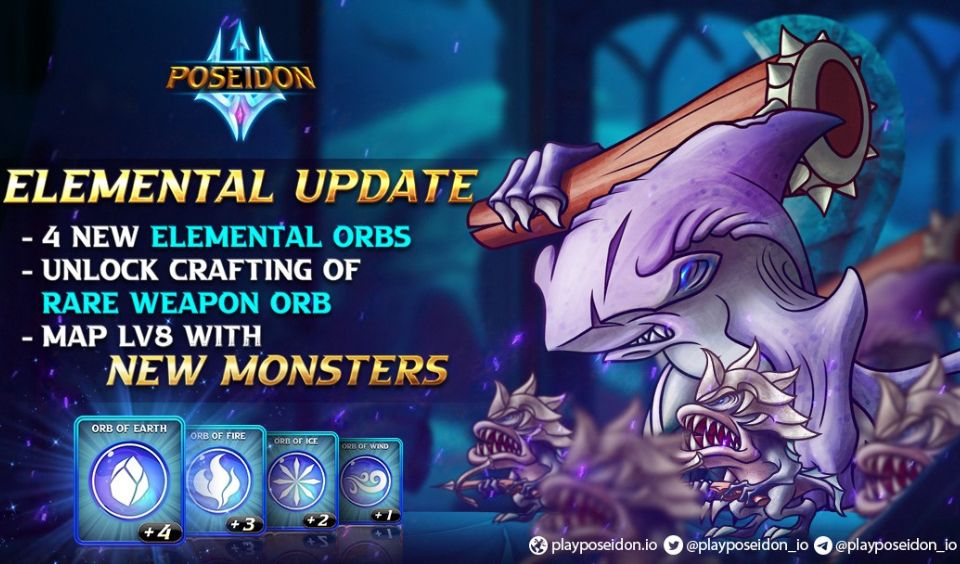 PlayPoseidon has announced the launch of the elemental update patch 2.2.0. This upgrade will usher in a particular class of weapons and higher-level adversaries. Players will be able to upgrade NFTs to level +9. The team will take the game offline by 5 AM UTC to complete all necessary modifications.

⚙️ Server will be taken offline at 5 AM UTC today for maintenance.

Following the release of the PlayPoseidon Elemental Update Patch 2.2.0, players will be able to craft Rare grade digital assets. With a mint fee of 0.018 $BNB, they can forge 4 Element and 4 Neutral class Weapon Orb. The team is encouraging users to own these NFTs, as it gives an 8% $PPP reward buff per match. In addition, you will also be able to repair the Rare Orb without upgrading it to the maximum level. This is a massive improvement from the Common version.

Equipping this in-game asset enables your Hero to damage your adversaries more significantly. It also applies a status effect based on the element. This implies that you can hurt your enemies if the Hero’s traits match the Orb’s. Although you can use this booster with a neutral Orb, it does not work with another elemental. If you are new to the system, you can learn more about the different Zodiac signs in this document. If you are looking for a new challenge, this next announcement is yours.

PlayPoseidon is introducing a massive feature from Map level 8. From this game stage, all monsters will have a passive damage blocker. Although theirs will be weaker, it will be similar to those of the Karkinos Very Rare Boss. Especially the new ones, the beings from this level are already very strong. Speaking of additions, there will be two new ground creatures. One is the Ultra Shark which can deal significant blows with its swing attack. While the second is the Hydra Fish which is fast and has a high range of DPS attacks. Worse still, they can shoot at a faster rate when they spawn alone.

Besides the modifications to gameplay, the PlayPoseidon Elemental Update Patch 2.2.0 offers balance and economic changes. Some of which include those below: