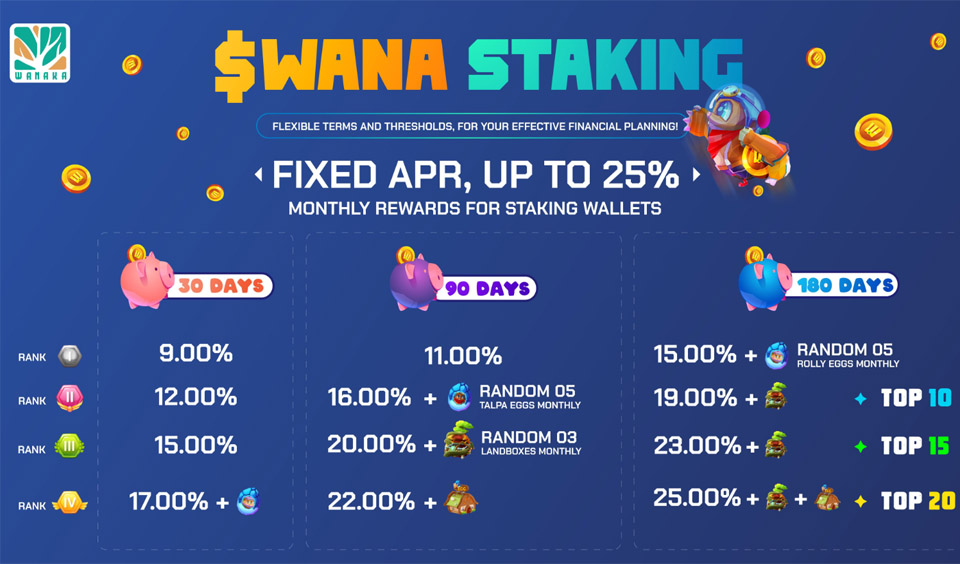 The multiplayer NFT-based game metaverse, Wanaka Farm, has announced the opening of its Staking Pool V2 scheme. The event, which has a fixed and sustainable APR of up to 25% comes with lots of huge in-game rewards for all stakers.

The goal of the new staking pool is to extend the APR percentage into multi-levels, depending on the amount and time of staking. According to Wanaka Farm, APR is fixed, irrespective of the number of people that starts after you.

Fixed & sustainable #APR, up to 25%, include a lot big in-game rewards for #staker

Stakers have up to 180 days of staking and the staking periods cover Pool I to Pool IV. The staking rewards are categorized into 30 days, 90 days, and 180 days, with 180 days having the highest rewards. For Pool 1, the rewards for the three periods are 9%, 11%, and 15%, respectively.

In addition to the 15% for 180 days of staking, stakers also get five Rolly Pet Eggs each month during the staking period. The highlights of the other Pool stages over a staking period of 30 days, 90 days, and 180 days are enumerated below, respectively:

It is recommended that stakers check the official staking website of Wanaka Farm for more information on the different Pool stages and staking periods. It is worth mentioning that the snapshot for the staking activities will be taken at the end of each staking month for a lucky draw starting from July until December.

The snapshot for the lucky draw will be done on December 31 and the prizes will be deposited into the Wallets of participants at the end of the staking contract. It is worth emphasizing that the new staking pool APR is fixed for all stakers during the staking contract period. However, the formula will gradually reduce with time.