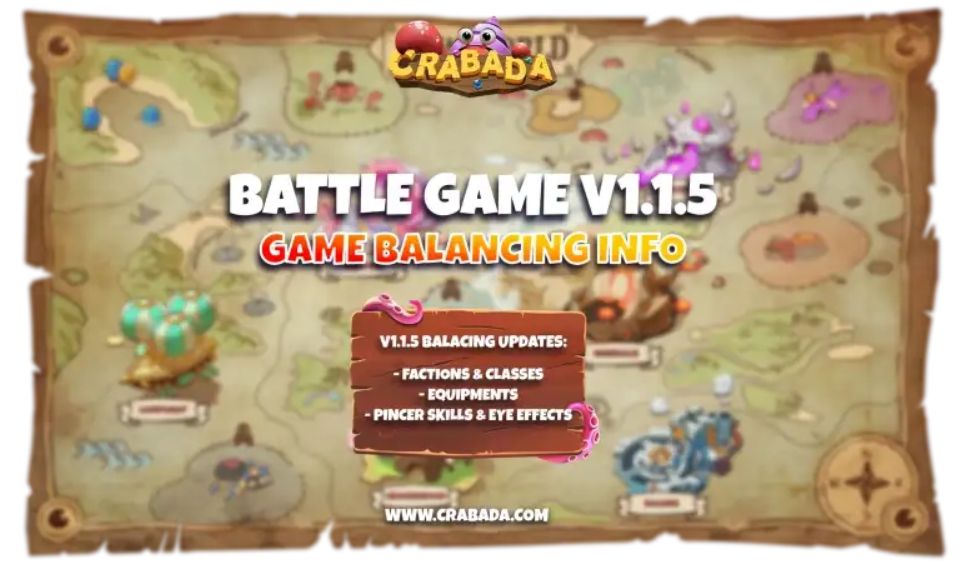 Crabada has announced that it will deploy the Battle Game v1.1.5 update on Monday, the 21st of November 2022. This patch will improve factions, classes, equipment, eye effects and pincer skills. More significantly, it will be launching the 1st Anniversary trivia as the game enters its birthday week. Players will be opportune to win 200 Spinach from this event.

As the Crabada Battle Game v1.1.5 Update goes live on the 21st of November, the team will initiate a faction balance. Bulk will depart from the Ore faction and join Trench, while Prime will join Faeries from Lux.

These classes are now part of the following factions:

Despite this balance, there will be no changes to the factional advantage chart. This is as shown below:

Meanwhile, the classes themselves will undergo adjustments. This is as shown below:

These are the changes to the HP recovery rate:

Crabada is adjusting the pincer skills to the following:

As it approaches its birthday, Crabada launches the 1st Anniversary Trivia. Interested persons can join this competition between now and 00:00 AM UTC on the 20th of November 2022. Fill out this form and answer all questions correctly to get 200 Spinach. Those who do not provide all the correct answers will still receive consolation prizes.

Participants must create accounts on the platform. This is because rewards will be distributed to their in-game inbox at the end of the event. Users must enter the email linked to their Crabada accounts when inputting their data. Using an alternative mail may render your submission invalid.

Everything You Need to Know about the Mech Master