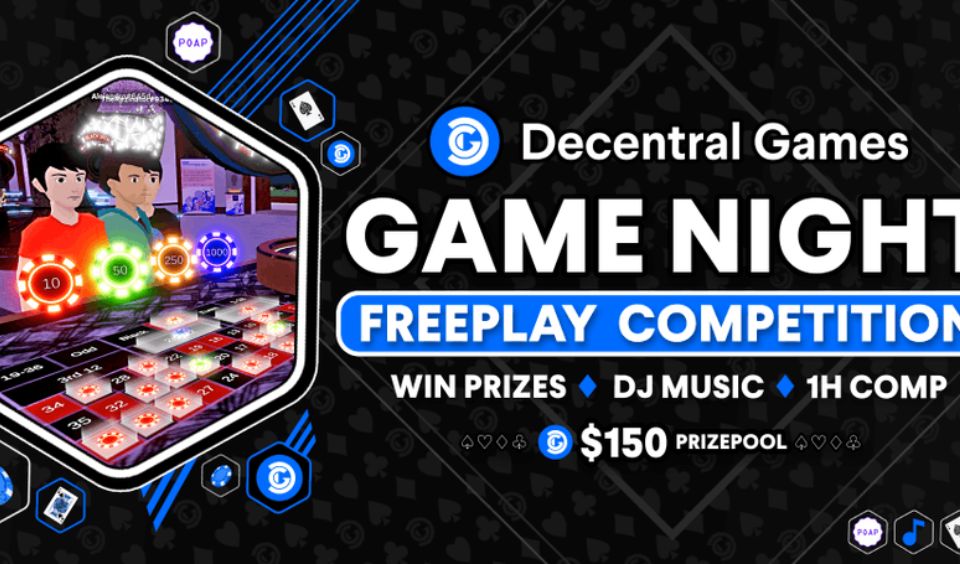 Decentral Games is offering everyone the opportunity to get in on the freebies. Over the coming weeks, there will be Free Games Night competitions. Unlike other contests, players will not need to own NFTs before joining these events. This comes after the launch of the ICE Poker Flex Tournament Mode.

As its name states, the Decentral Games Free Games Night competition will feature different activities. Participants can enjoy free blackjack, roulette, slots and many more to win $DG. Besides gaming, there will also be other entertainment like Music for users to enjoy. This is a massive opportunity to try out new things at no cost. Players can also invite their friends.

There will be three editions of this contest. However, the first will occur on the 20th of September 2022, by 3 pm UTC / 11 am EST. This experience will only run for one hour. Therefore, you should stack up your winnings fast. The prize pool of $150 worth of $DG will be distributed among the best five players. Below is a breakdown of rewards:

The team will send all the prizes via the Polygon network. Despite issuing a breakdown of the compensation, the announcement did class winners according to the different games. As such, it is believed that there will be a general scoring system for everyone, regardless of the gameplay experience in which you participate.

Meanwhile, there will be subsequent editions of this contest on the 27th of September and the 4th of October. More details are available on the Decentral Games Discord server.

Earlier on, Decentral Games entered a strategic partnership with Glow Labs. Shortly after announcing this collaboration, the firm announced that the smart contract was exploited. As such, the team is pausing the distribution of rewards. These benefits were supposed to be shared every 24 hours and completed by September 30th.

Despite the incident, DG has issued another update that all the funds in the wallet are safe. According to investigations, this exploitation caused users to claim their payoffs repeatedly. As such, the earning via the engaging mechanism will be suspended. However, people who have won earlier can continue making their claims.