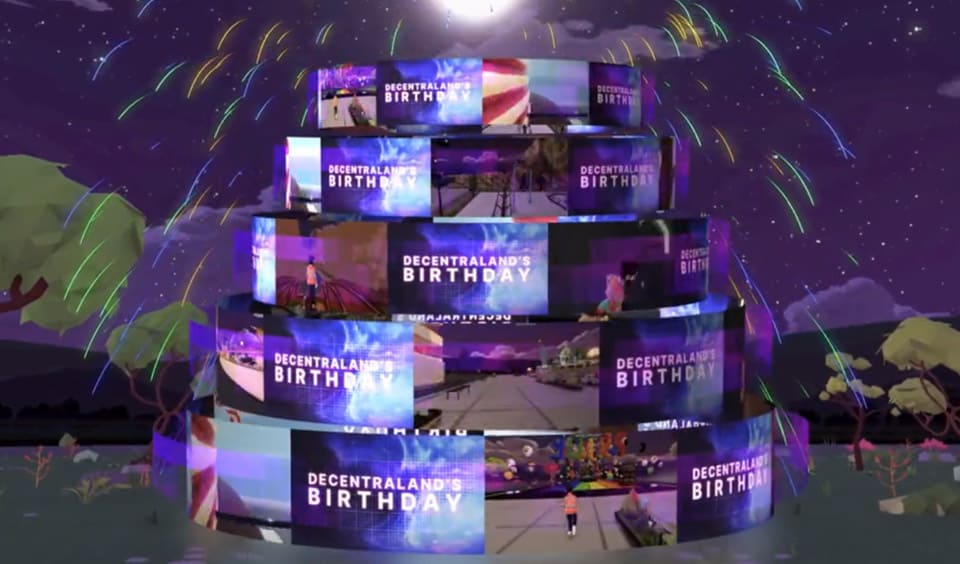 Decentraland, a virtual reality platform built on the Ethereum blockchain, turns two on February 20, 2022. In the little of its existence, the game platform has grown significantly and attracted massive adoption from the game community.

Decentraland offers users the platform to create, experience, and monetize applications and content. Members can purchase Land in Decentraland and become permanent owners. That means Landowners have full control over the Land they bought and can create anything on it.

Land in Decentraland is a non-fungible, scarce, and transferrable digital asset stored away in an Ethereum smart contract. Potential owners can acquire the land by using an ERC20 token known as MANA. Holders of the MANA token can also use it to purchase in-world digital goods and services.

The celebrations being soon, are you ready to party!?

How Decentraland Plans to Celebrate its 2nd Birthday Party

To celebrate its 2nd birthday and its numerous achievements within the two years of the launch of the pioneering metaverse project, Decentraland announced that it would throw a birthday extravaganza party.

The party will feature different events, including a major quest, a special performance by Asia’s top Artist, Akira, and a montage of DCL Film Club entries. Additionally, members of the community will have access to various special prizes for their support of the project. Suffice to mention that all these activities are slated to take place in a giant cake.

How The Project has Evolved

Decentraland started as a concept that allocated digital real estate ownership to users on the Ethereum blockchain. This was first implemented as a pixel of an infinite 2D grid where every pixel had metadata that identified the owner. That experiment was called the Decentraland Stone Age.

The team began to develop the Bronze Age in late 2016. This was a 3D virtual world grouped into land parcels. The platform hosted the first-ever world viewer at the game platform. Users can download and verify the blockchain, run a node, and explore Decentraland using advanced instructions.

The game platform launched the next version of Decentraland, which it calls the Iron Age. This creates a social experience with its economy that is driven by current layers of content distribution and land ownership.

Developers on the platform can create applications, distribute them, and monetize them. It also uses peer-to-peer communications, a fast cryptocurrency payment system, and a scripting system that enables interactive content.

Within the past years, Decentraland has achieved a large percentage of its plans and what it sets out to do. Today, community members own LAND and use scripting system tools to create applications, 3D objects, and sound that run on their LAND parcels.

What to expect from blockchain games in the next five years?

What to expect from blockchain games in the next five years?