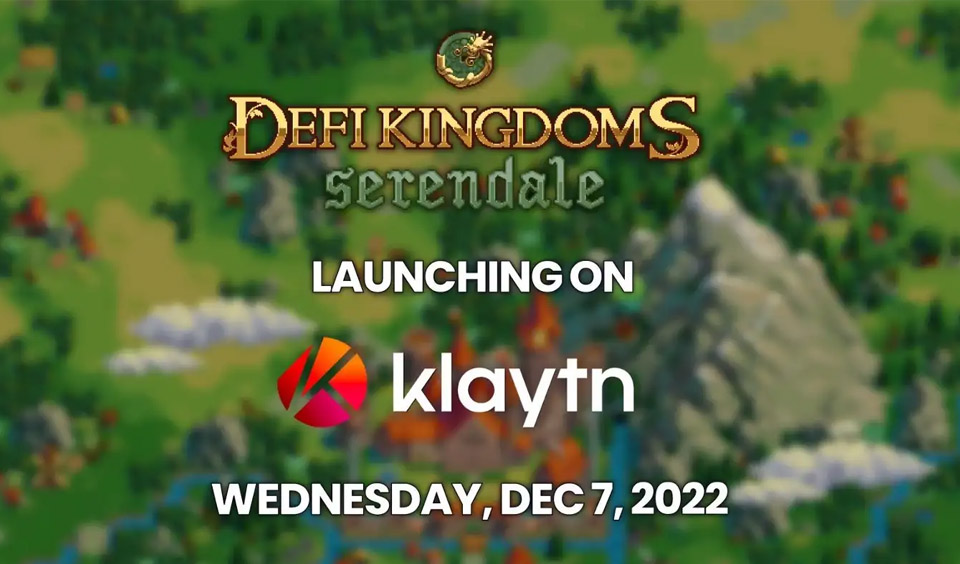 The cross-chain playable NFTs gaming platform, DeFi Kingdoms, has announced the re-launch of DeFi Kingdoms Serendale on Klaytn on December 7. While the earlier launches of Serendale on DFK Chain and Harmony started small, the game platform has assured that the Klaytn launch will be bigger.

It will include several Serendale features that users already know. According to DeFi Kingdoms, the re-launch will feature a new look for the old NPCs and a new map created from familiar elements. Additionally, it will have updated sections specifically designed for the new launch on Klaytn.

What Features are Available on Launch?

DeFi Kingdoms revealed it took a snapshot of all Land ownership and Locked JEWEL on November 14. The team will use this data for airdrops in Crystalvale and Serendale. The airdrops that will take place at the launch on December 7 include Unlocked JADE, Vesting JADE, and Locked JADE on the Klaytn platform.

Vesting JEWEL airdrops will take place on the same day at DFK Chain. It is worth mentioning that airdrops of Serendale Land on Klaytn and Locked CRYSTAL on DFK Chain will hold at a later date.

Marketplace: Users will have the opportunity to buy and sell game resources, JADE, and other Klaytn tokens through Trader Matoya on the new Klaytn DEX.

Gardens: This feature will offer incentivized pools for JADE tokens as rewards for liquidity provision. The Gardens will have locked and unlocked JADE rewards with an initial high-emission rate. This will reduce after each epoch. It is worth mentioning that Garden emissions start 24 hours after the completion of Locked and Vesting JADE airdrops.

JEWELER: The game platform announced its sJEWEL goes live immediately at launch. Users can stake JEWEL tokens with the Jeweler for sJEWEL. This allows them to earn a part of the in-game transactions. The locking mechanism will encourage staking and allow project supporters to receive higher rewards and have more say.

Quests: Players can look forward to Profession and Training Quests for their Heroes from the first day. Profession Quests will include Gold Mining, Foraging, and Fishing. Once players lock JADE tokens, they can access JADE Mining. Gardening Quests will also be available immediately but the team will limit the rewards until the Gardening emissions go live.