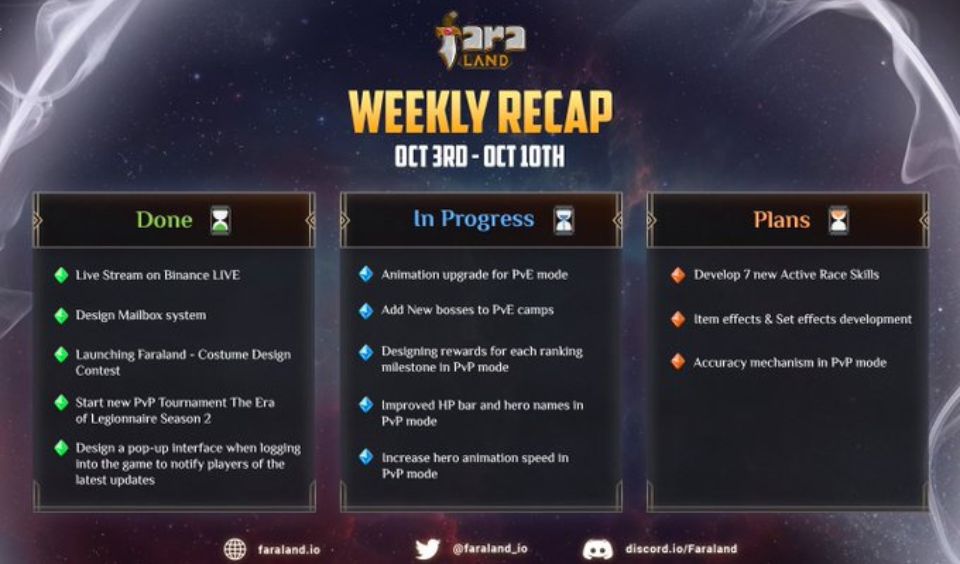 Faraland has issued the weekly update for October 3rd to 10th. This recap incorporates stellar achievements over the past 7 days. They include introducing a new Era of Legionnaire PVP Tournament Season 2 and new weekly live streams. The team also gave insights into the ongoing developments as well as upcoming plans.

🔥 Lots of exciting features are waiting ahead

🎉 And stay tuned for our developing plan!!

Details of the Faraland Weekly Update for October 3rd to 10th

The Faraland Weekly Update is divided into three categories for October 3rd to 10th. They include the completed projects, ongoing ones and future plans. Below are the details.

The team has completed the design for the mailbox system. Following this introduction, users can now get notices about new releases. In addition, they will also receive updates on new features, changes to the log, time of tournaments and other happenings. Besides the notices, players can also use this system to claim rewards from PVP. This includes the top 10 and 300 daily compensations and airdrops.

Faraland is also introducing a weekly Stream on Binance Live. During this event, the team will explain the skill system and enable players to master all their abilities. Meanwhile, season 2 of the Era of Legionnaire PVP tournament began on the 28th of September. In this edition, any player with the highest score will receive Emperor Stone.

In addition, the NFT Costume design competition sponsored by MoonKnightLabs and art universities is now live. The winners of this contest will receive a total prize pool of more than 50,000 $BUSD.

Work is currently in progress (about 70%) to upgrade the animation in the PVE mode. The team will also update models for the correct monster types and terrain themes. More so, they will be designing rewards for each ranking stage for the PVP mode.

Following this modification, this will be the new compensation system:

NOTE: Milestone rewards are for players who cannot finish among the top rankers. They will also get compensation regardless of where they finish on the leaderboard.

There will also be further gameplay improvements, as shown below: