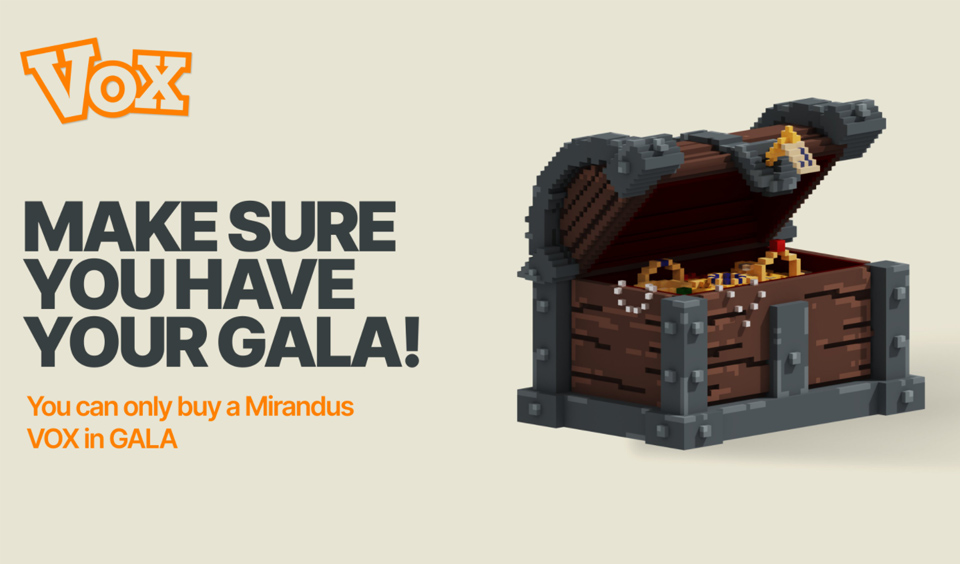 Gala Games, a play-to-earn game platform, has announced its VOX launch party slated to take place on December 6, 2021, between 11 am and 1 pm PST. This event has been scheduled to precede the launch of the big Mirandus VOX Box on the same day. Interested participants will be able to purchase the Mirandus Box on December 6 at 2 PM PST.

Don't miss out on the VOX Launch Party, tomorrow from 11am-1pm PST, before the big #Mirandus #VOX Box drop!

Come join the fun. It'll be like standing in line, except AWESOME and your feet won't hurt 😄 😉

The Mirandus Box is a total of 8,888 unique ERC-721 collectibles, featuring epic utility. Holders of the Mirandus Box have NFTs that they can use to complete in-game challenges and earn rewards, including TownCoin. The first season of the game is free for everyone that participated in the game.

Members of the game community will have access to the latest information, tips, and tricks associated with the game.

Highlights of the Mirandus Box Game

The Mirandus Box is the second series in the collection of games available through the Gala Games platform. The game is inspired by Mirandus, the platform’s MMORPG. Players will have access to adorable dwarves, elves, orcs, and numerous other fantasy creatures.

As mentioned, each VOX is a special ERC-721 with verifiable randomized character. For every series that is released, there will be a total of 8,888 characters available.

Highlights of the Mirandus VOX

The VOX makes Mirandus very powerful and holders have the opportunity to enjoy manifold benefits when they complete a quest of pairing their VOX with its matching Exemplar. This unlocks a special bonus within the game that players can enjoy. Gamers can also earn TOWN every day.

All that they have to do is place their Mirandus VOX in Town Star while they complete the challenge. With more upgrades to the game, players will be able to with their avatar within the game metaverse and earn $VGKCoin also. The VOX is an ERC-721 NFT that is randomly generated. It begins with class selection and then individual attributes are included one after the other.

Those who are interested in owning the VOX can participate in the Mirandus series drop, which comes up on Monday, December 6 at 2 pm PST. Participants will be able to view the Mirandus VOX Boxes when the sale starts at 2 pm.