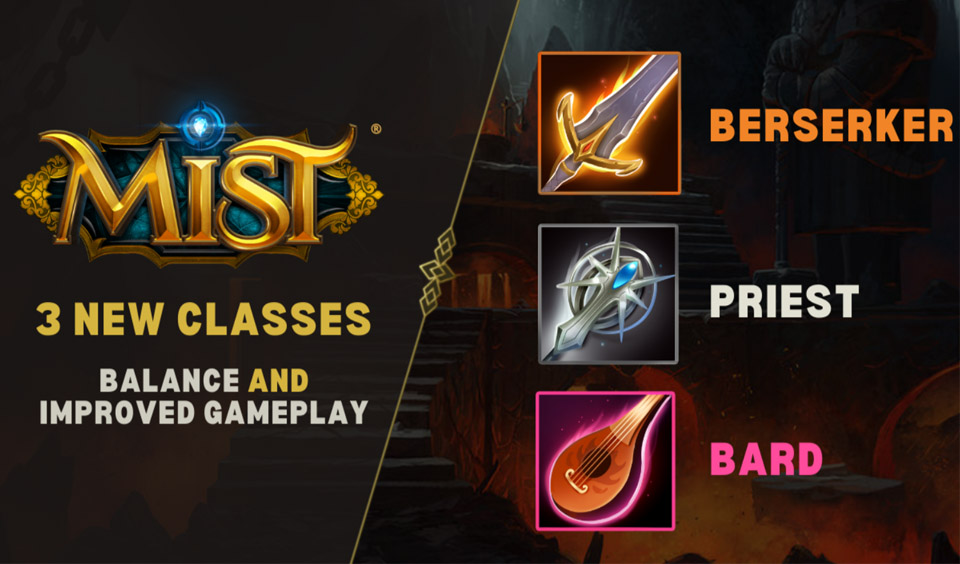 Mist NFT, an open-world play-to-earn MMORPG game metaverse, has added three new classes. The game platform reveals that it plans to make Mist a completely balanced MMO with strategic combat, PVP, raids, and dungeons. Therefore, it has added two support classes, which are Priest and Bard, and a DPS/tank class called Berserker.

What Problems Were Discovered Earlier?

While testing its combat system, Mist NFT realized that dedicated tank class and support would be required. That is because the absence of support roles would put limitations on the gameplay. For instance, if there is no healer class, big-scale raids and dungeons would become almost impossible to play correctly.

To follow up yesterday's AMA:
We are adding 3 classes to improve gameplay balance and strategy!

Read More on Medium about the details:https://t.co/4Yb2pbkgII

Also, PVP Combat would become the battle of the player that can cause the most damage within a timeframe. Not only that, tactics and strategies also become overly simplified and limited without a dedicated tank class or a healer.

During the countless hours of testing and planning, it was also discovered that PVP combat was too simple because it does not require much teamwork, collaboration, or strategy. Mist NFT also discovered that the play-style of the two factions were overly similar even though they possessed different races.

This reduces the play of each class and reduced the lore and immersion of the game. Mist NFT wanted the Order and the Clan to have obvious and strong personalities.

What Solutions were proffered and what Benefits are Inherent?

Mist NFT will be including the three new classes to resolve the issues highlighted above before the launch of the game. These new classes are Priest Class, Bard Class, and Berserker Class. The game platform is also planning to make the Berserker playable on the Clan alone and the Crusader on the Order only.

By adding two support classes, the gameplay becomes more strategic and dynamic, which will enable Mist NFT to deliver more strategic PVP and intense PVE raids and dungeons. All these would be made possible with support and healers.

The Berserker class aims to balance out players’ choices on Tanks. This class addition will provide a unique playstyle different from the Crusader but will function in similar roles. Suffice to mention that while these 3 Classes are NFTs, they will not be included in the first edition of Highborn NFTs.

That means they cannot compete with the First Editions. They will perform different roles in the game and are required to form strong groups, strong guilds, and strong parties.