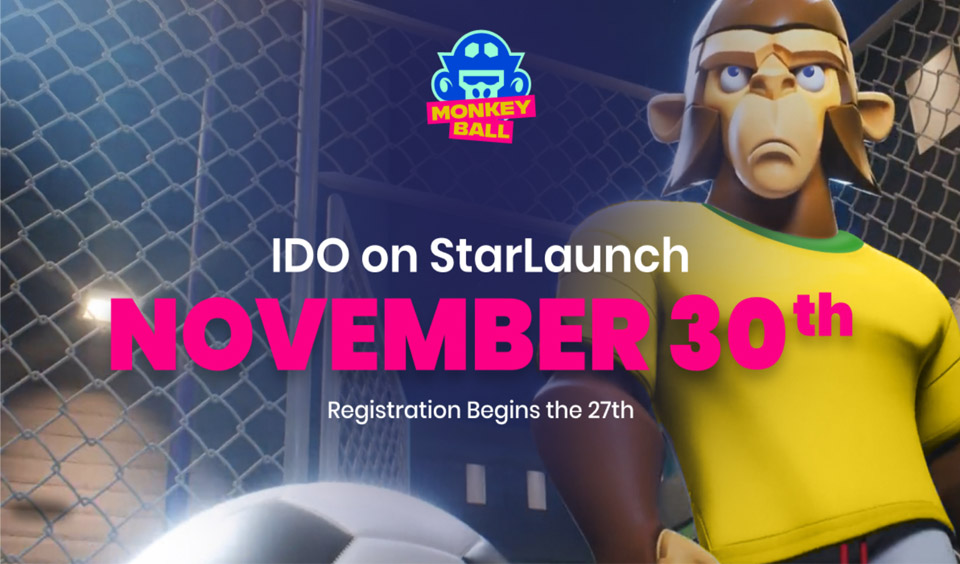 MonkeyBall, a new Solana-powered P2P game, has announced the launch of its IDO slated to take place on November 30, 2021, on StarLaunch, a growing Solana-based incubation, and IDO platform.

To the world we respond – November 30th.

To the near 60K strong Monkey community – Let the games finally begin! ⚡️🔥🚀

The IDO sale, which is planned to launch on November 30 will commence registration for participants on November 27. About 1% of the total supply of MonkeyBall MBS tokens will be made available to the public.

This percentage makes up 10 million of the 1 billion MBS tokens that are available for distribution on the MonkeyBall platform. The price of the token is announced to be $0.04 per MBS token. At the end of the IDO sale, the platform is expected to have raised a diluted valuation of about $40 million if everything goes well.

What’s More About the $MBS Token

The $MBS (MonkeyBucks) token is the major in-game currency that powers the game economy in the MonkeyBall metaverse. Players can purchase the $MBS on CEXs and DEXs. They can open Loot Boxes, win, or mint the currency through the completion of missions, hosting games in virtual Stadiums, being a spectator in a match, or participating and winning in matches.

With the token, players can improve their current tokens, breed new NFTs, and buy consumable items from the game store. The $MBS token is capped and in very short supply.

This means that the game’s economy will continue to grow when the demand for the token grows and so will the rate. Players with the $MBS token will have access to exclusive advantages and perks before the first game model of MonkeBall gets released.

Benefits of Holding the $MBS Token

Players that own the $MBS token will have premier access to the forthcoming NFT drop and they will be able to farm the $MBS tokens for rewards. As soon as the IDO is completed, MonkeyBall will announce a reward plan that $BBS holders can explore.

Players with the $MBS token and Monkey’s NFTs will be the first to breed the next-gen Monkeys. They will be able to trade the Monkeys in the marketplace or complete a team with them.

More about the IDO Sale on StarLaunch

Revomon The Democratization of Virtual Reality