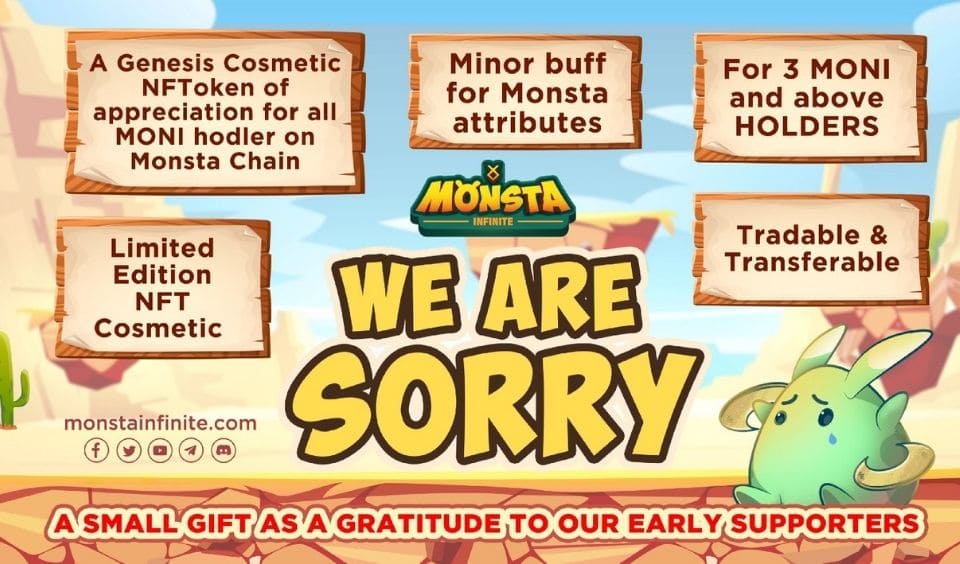 Monsta Infinite cancels the launching of its MONI — STT Pool and Monsta Sale indefinitely. This announcement came from their development team. It also came just hours before the time of the official launch. The company gave two major reasons for the cancelation.

This launch of the STT and sale of Monstas was to give players in-game characters and boosters to improve gameplay. By buying Chrono Zero and Soulbound eggs, users can breed game characters that will help them win battles.

One of the major reasons for canceling this event was doubts about the activity of the market. The company anticipated an increase in market activity. This is because Monsta Infinite has a large community and most of its members are very active. In this regard, the company was monitoring the traffic in its marketplace. Hours before the long, it discovered a significant spike in traffic. This was very disturbing as their present infrastructure will not be able to handle the traffic.

Initially, Monsta Infinite was confident of the infrastructure and its ability to handle the market activity. Furthermore, the company even tried to release the marketplace gradually. The developers were of the opinion that gradually releasing the marketplace will enable the infrastructure to support the spike in activity. However, this was not the case as the increase continued even though the event has not officially launched.

At that point, it became obvious that the increase in activity will continue even more when the launch begins. This led to the structure crashing even before the launch. Upon this crash, the development team rallied to enable the structure sustain the oncoming traffic. However, this was all to no avail as there were subsequent crashes. With the company unable to fix, they had to postpone the launch pending when they can resolve the issue.

Another reason for the cancelation was the ability of the infrastructure to provide premium user experience. Considering its inability to handle the high traffic, it is certain that it will not serve buyers. With the multiple crashes, allowing transactions go on may result in loss of digital assets.

Despite the issue, Monsta Infinite still remains positive about the launch. Even its community members are still positive about the project. The assets of buyers are still safe in their respective wallets. To compensate users for this setback, it will be airdropping NFT tokens to certain individuals. It took a snapshot at all the wallets on its platform at exactly 22:00 GMT+0 22 October 2021. Those with 3 or more MONI in their account will get an exclusive Genesis Cosmetic. This NFT is the first Cosmetic NFT that Monsta Infinite will release. Check out this link for more details.