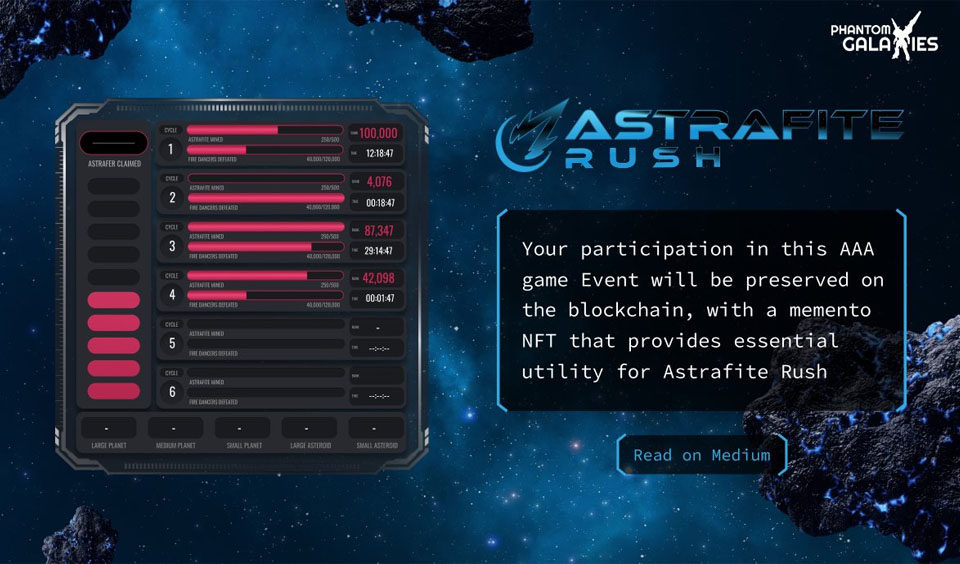 Phantom Galaxies, the Mecha Starfighters Battle game on the Blockchain, has introduced the first-ever Proof of Experience NFT in an AAA game – the Astrafite Rush: Progress Tracker.

This new feature will preserve players’ participation in the AAA game Astrafite Rush Event on the blockchain. Additionally, they will receive an NFT memento, which offers vital utility for Astrafite Rush.

This NFT will be airdropped to players who participate in any Cycle of #AstrafiteRush, and have essential utility for the Event! pic.twitter.com/4nwubnumgj

How to Receive the NFT

Phantom Galaxies mentioned it will airdrop the NFT to gamers based on their contribution to a specific Cycle. Therefore, players who join Astrafite Rush during a Cycle and contribute in any way towards their objectives will receive the Astrafite Rush: Progress Tracker NFT at the end of the Cycle.

The game platform stated it will not airdrop a duplicate NFT to players with an Astrafite Rush: Progress Tracker NFT from previous Cycles. Instead, it will add new Cycle information to the gamers’ NFT. The game will lock the NFT to the wallet of the original recipient during the Event and will unlock it on December 21.

How to Claim ASTRAFER Rewards

According to the game platform, the NFT tracks Event information, such as the Player’s Astrafite Mined, Leaderboard Rank for each Cycle, and Fire Dancers Defeated.

It also shows a breakdown of Planet(s) owned by a player, total current ASTRAFER earned and claimed during the Event and Goal completion times. Players can view all earnings, claiming, and progress information updates that are automatically displayed on the NFT.

The Event will end on December 14, and after that, Phantom Galaxies will allow a week to save the progress and rewards of Cycle 6. It will unlock the Astrafite Rush: Progress Tracker NFT on December 21 for trading and start the reward-claiming process by January 4.