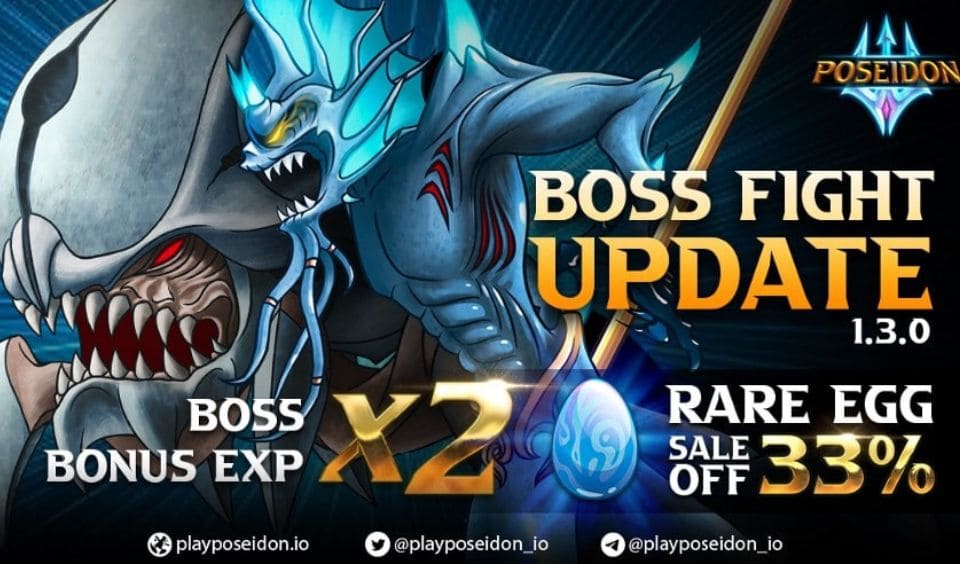 In this new week, PlayPoseidon is giving members of its community a lot to look forward to. One of such is the Boss Fight update 1.3.0. In this upgrade, the game will be improving  its server and client version. To celebrate this improvement, there will also be a number of events.

To effect the Boss FIght update 1.3.0, PlayPoseidon will be closing down its server for maintenance by 6:00 AM UTC on the 6th of June 2022. Following the upgrade, there will be a series of events that will run for the next two weeks. They include the following:

There will also be special gifts to the first 2 persons to defeat the VeryRare or Epic Boss in Map Level 6. However, the player will have to prove they did so by recording the encounter on video. Then proceed to upload it on YouTube, Twitch, Vimeo or Facebook. The team will select the winner immediately after it verifies the date and time of upload. In addition, there will also be rewards to users who upload videos on any social media platform and gets views, likes or reaction of more than 5000.

From the 6th to the 24th of June, PlayPoseidon will be offering the premium Rare Egg for sale. The price will start at 0.08 $BNB per unit in the first week. After which the game will add 0.02 $BNB over the next two weeks. After the event ends, this NFT will no longer be available for sale. 80% of the funds raised will be added to the $PPP-$BNB liquidity pool on PancakeSwap. While the rest will be for server, servicing, gas fee for the GameMaster wallet and other operational actions.

As part of this new update, PlayPoseidon is introducing Treasure – a new type of Gacha Item. The Rare version of this property  will come with a staking income feature. Users who participate can earn as much as 506.94% APY in $PPP. With payouts set to begin as early as the 8th of June. Players should endeavour to stake now as the APY will be reduced after the event celebrating the Boss Fight update 1.3.0.