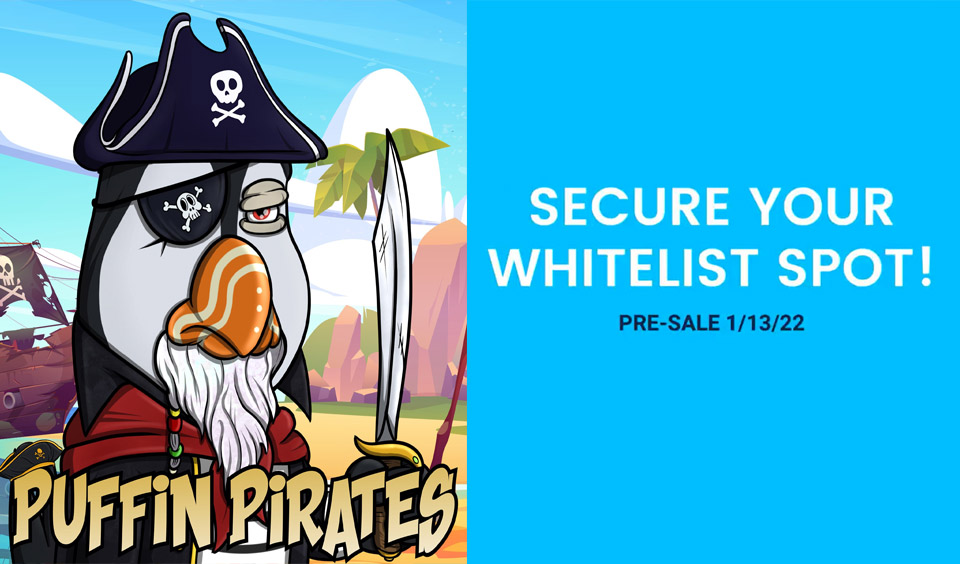 Puffin Pirates, a play-to-earn NFT-based game featuring rowdy Puffin Pirates, has announced the launch of the Pre-Sale event for its $BOOTY tokens. The event is scheduled to hold on January 13, 2022. The event is first targeted at whitelisted members and this category of participants will have 48 hours for minting their Puffin Pirate NFT tokens.

There are a total of 10,000 randomly generated NFTs available to members. These NFTs are available on the Ethereum blockchain. The Puffin Pirates community, referred to as the Colony, will have the opportunity to mint different assembled avatars covering over 130 special traits.

Whitelisted members have the chance to mint up to ten NFTs at the Pre-Sale Event. Suffice to mention that each Puffin Pirate NFT will be sold for 0.07 ETH. Pre-Sale buyers at the event will be entered automatically to win one of the fifty free NFTs available at the event.

Importance of owning the Pirates $BOOTY

Holders of the Puffin Pirates tokens will have access to the play-to-earn NFT game in the metaverse. Players will be able to fight and win battles against other players and earn $BOOTY, the in-game currency. Players will also have the opportunity to sell, buy, and trade more NFT items in the game.

The NFTs also give players some members-only benefits and some future benefits, which will be unlocked as the game progresses. Some other benefits that accrue to holders of the $BOOTY include Puffin Pirates merchandise, NFT staking to earn more $BOOTY, and other in-game killer prizes.

More about the Game

Puffin Pirates is a play-to-earn, NFT-based, multiplayer game. The game features various rewards systems where players get rewarded with $BOOTY tokens. The $BOOTY tokens are the in-game currency of the game platform and players can sell, buy, or trade extra NFT items in the marketplace.

The game also features a single-player mode where players have to defeat arch enemies known as the Reeking Rogues to level up.