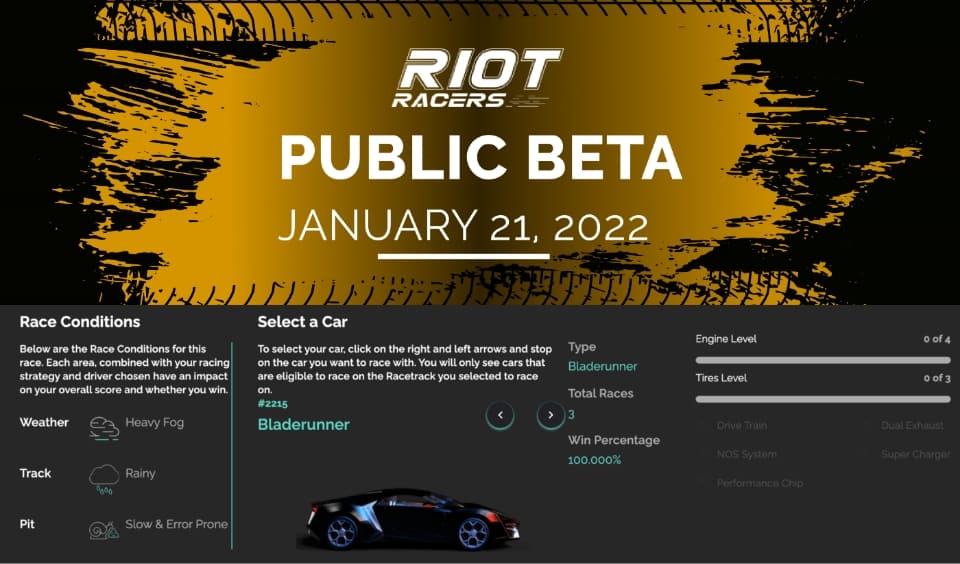 Earlier on, Riot Racers did a private beta testing of their racing game. Following the successful completion of that event, it will be launching the Riot Racers Public Beta Game. The launch will take place on the 21st of January 2022. It is inviting lovers of car racing games to come participate in this event.

Come the 21st, visit the Riot Racers website to join the game. Simply navigate to the top bar, select Race and start playing. To participate, players must have at least one car and one driver. With a car, you can enter unlimited within the class of your racecar. Details of the beta launch was made via Riot Racers’ News Page.

For those who did not participate in Riot Racers Private Beta, here is how to play the game. First, you have to choose the race you want to enter. You can purchase a Riot Racers Car from Opensea. However, you can only partake in races within your race class your car. The more cars in your garage, the more races you can enter. Should you decide to enter a race, the game will show the racing conditions. This includes the weather of the race, track and pit conditions.

These strategies play essential roles in the eventual outcome of every race. Alongside the car and driver, they can help you win a race. For a better understanding, here is a breakdown of how this game determine its results:

Although the beta will launch in two days, there is still more to come. For example, the game will not be launching the play-to-earn features immediately. These features will take effect in late February. This is because it is still putting finishing touches to the monetization of the game. Therefore, there will be no prize rewards for playing this game. All the same, players can use this opportunity to master the game and develop effective racing strategies.

In addition, the Apollo Collection car drop will also take place in February. This is the first drop of the Apollo series. In this drop, players will get the chance to own 7,777 different epic car models as NFTs. Details of the other plans of Riot Racers plans for the year are in the Riot Racers Roadmap.