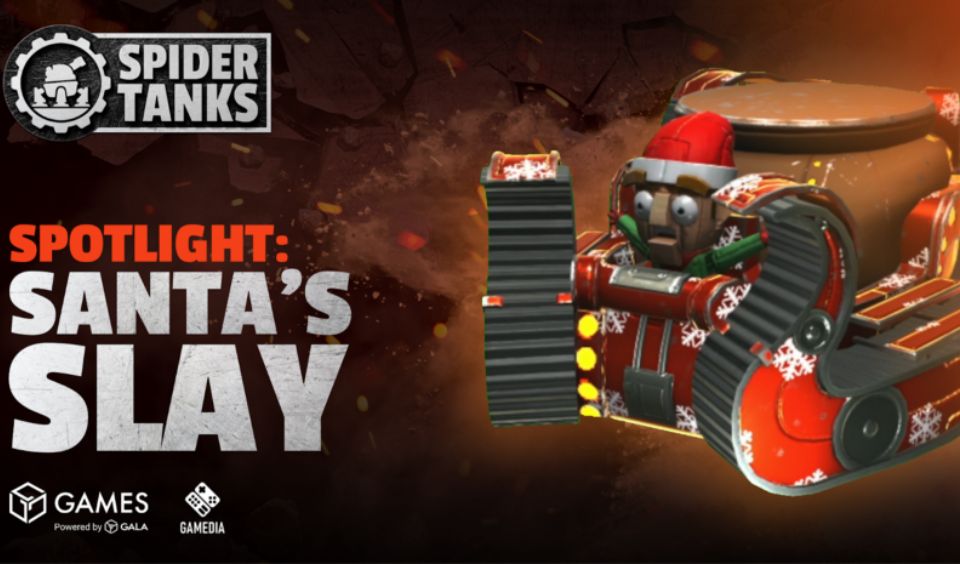 In this edition of Spotlight, Spider Tanks is shining the spotlight on Santa’s Slay. The team is ending the holiday season by showing this powerful tank with a reputation for destruction in the Arena. Interested players can get this asset in OpenSea. It is not available in the Spider Tanks Store.

oh snap. santa’s come and gone, but he left his ride in the arena

see how you can use this beauty to 🎄 slay 🎄 your opposition#SpiderTanks #TankShowcasehttps://t.co/4g4occrWZe

This announcement comes after an update notifying players of free props with which they can design their garages. Meanwhile, $SILK is set to list on the HitBTC exchanges. Further updates will inform traders and community members when this goes live.

According to Spider Tanks, Santa’s Slay is designed to administer justice through large festivals surrounding the cosmic winter time of ancient Earth. It is believed that Santa hid in chimneys across the world. From here, he was watching, punishing and rewarding people according to their actions. This tank will follow a similar fashion, terrorizing its allies and blessing its allies with some holiday benefits.

Do not allow the snowflakes and other adornments to deceive you, this vehicle is one of the deadliest in the arena. Santa’s Slay has a two-directional body that can only move forward and backwards. It builds momentum gradually and may continue to move forward for a while after you change direction. Therefore, it will take only the best pilots to maneuver this vehicle efficiently.

This tank can take out enemies without issue despite the seemingly directional challenge. Thanks to its loops and doughnut patterns, it can fire strikes in any direction at astonishing speeds. Speeding of swiftness, this vehicle can shoot two snowball projectiles simultaneously.

More so, these are not just trial shots. They are capable of causing decent damage and have excellent range. You can slow your opponent with these snowball hits. In addition, the effect leaves ice tracks in your enemy’s path. This will further impede the mobility of any enemy tank that steps on them. On the contrary, these snow tracks accelerate the speed of your vehicle.

Besides the armored vehicle, many additional features make this asset deadly. You can use its body in combination with those of a Nomad. In addition, you can also mount the Snowballer weapon on a heavier tank. This helps you dominate King of the Hill or Chicken Chaser game modes. You can also give your smaller and faster vehicles a weapon boost.