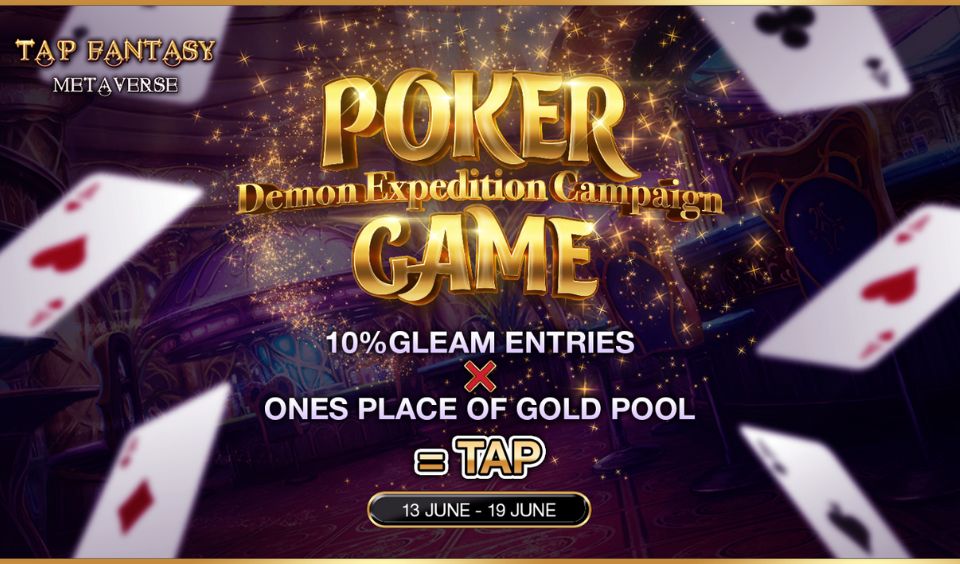 Tap Fantasy – an MMORPG blockchain game has launched the Demon Expedition Campaign. This is a week-long Poker Contest that is open to as many players as possible. While making this announcement, it also reveals that the prize pool will be equivalent to the amount of entries it gets. In other words, the prize pool will be higher if more users participate.

Details of the Demon Expedition Campaign from Top Fantasy

The Tap Fantasy Demon Expedition Campaign will run from Monday the 13th of June to Sunday the 19th of June 2022. As mentioned earlier, the volume of participation will determine the rewards that will be distributed. It will be 10% of the entire Gleam Entries. In addition, the ones that place number of the Final “Demon Expedition” Gold Pool will also consist of the prizes.

Anyone who is familiar with the Tap Fantasy knows that there are four elements within gameplay. They include: Water, Earth, Fire and Air. Your chances of topping the leaderboard depends on the form of each of them. As a Poker Game, the outcome will include the following outcomes:

To receive your reward, send a screenshot of your result after you complete playing Demon Expedition.

Despite not giving much info on the payoffs, the team did reveal that there will be 50 winners from this campaign. Each of them will get a different ratio as their share for ranking as the top players. To further simplify things, the game gave a breakdown of the process. This is as shown below:

There is a four point algorithm in place. It consists of:

As mentioned above, the compensation is 10% of the total entries. Take for example, the total entries are 308569. 10% will be 30856.9. If the final ones that finish in the Gold Pool are 5, the rewards in the following order:

To consolidate on the earnings of the top 50 players, the outcome above will be considered. Therefore, below are the results.