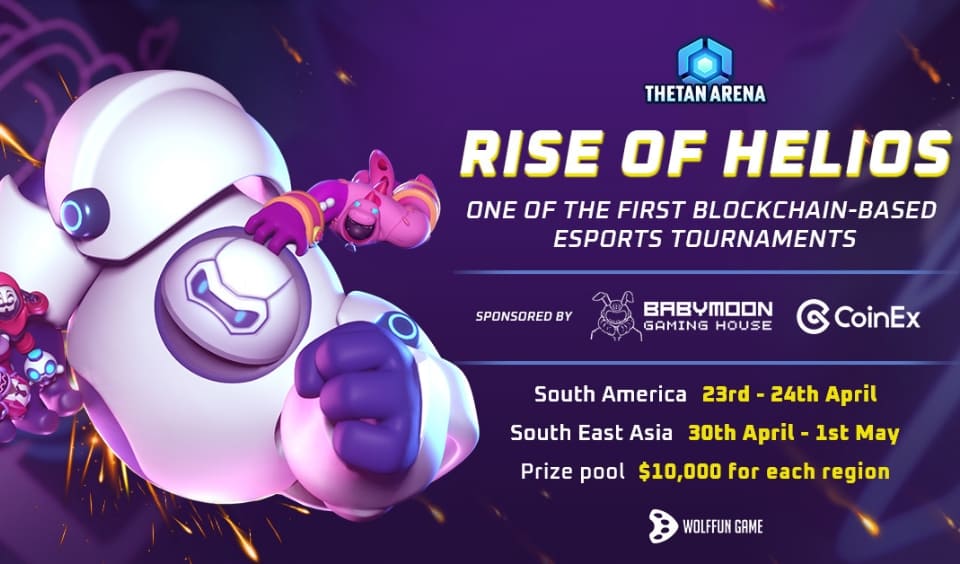 Thetan Arena is announcing the very first blockchain-based eSports tournament titled the Rise of Helios. This contest is set for players in South America and South-East Asia who want to make a name for themselves.

Only with reliable teammates can you make your way to the top of Rise of Helios.

Details of the Rise of Helios eSports Tournament

The Rise of Helios eSports Tournament is an opportunity for players to receive rewards for spending more time playing the game. In this competition, there will be a $20,000 BUSD prize pool from which players can earn. With each region getting $10,000 each. The contest is also sponsored by  BabyMoon Gaming House and CoinEX, which recently entered partnerships with Thetan Arena. Below are the prizes for the participants:

The Rise of Helios eSports Tournament will run from the 23rd to the 27th of April 2022 for players in Latin America. It will start at 3 PM ET or 7 PM UTC every day. For players in South East Asia, the tournament will run from the 30th of April to the first of May. Time is from 3 Pm or 7 AM UTC, every day. Only players in the South America or South East Asia regions can join the contest. Also, player MUST be at least 18yrs of age to be eligible. Those that are less than 18 must provide Proof of Consent signed by a parent or a legal guardian.

How to Join the Contest

The competition will follow the Tower, Superstar and Deathmatch game modes in no particular order. There will be up to 512 teams for each region and each team will consist of 4 members. Before the start of the contest, there will be a meeting involving the meetings of the various teams.

Despite having four members, the entire team will have 1 tournament life. In other words, any player losing 1 match will result in the elimination of the entire team. These matches will follow the Best of Five knockout format. As such only the team that wins 3 individual games will advance to the next stage.