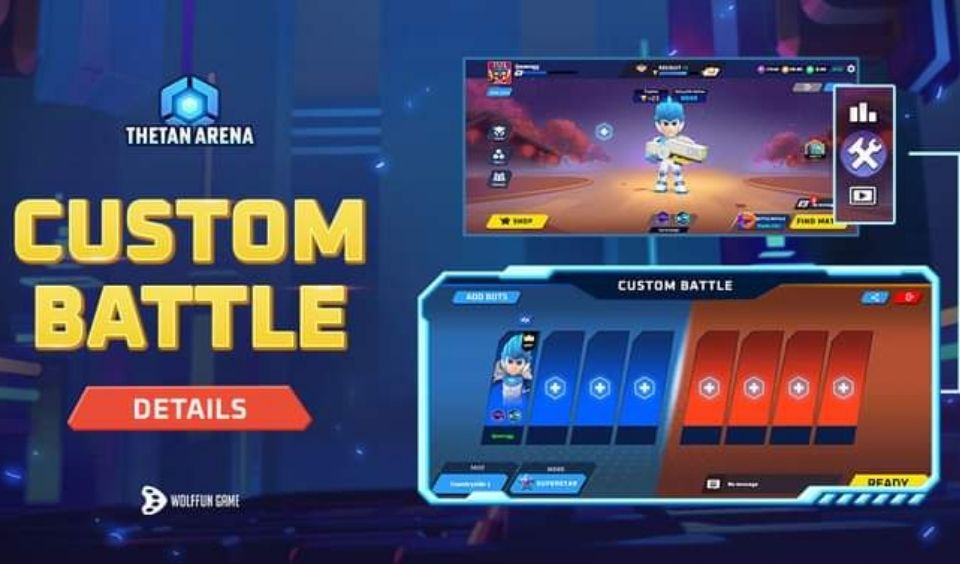 Thetan Arena announces the introduction of custom battle to the game. In this mode, players can create private rooms where they can play with their friends and family. Announcement of this new battle mode was made on the 3rd of March. Here are the details.

More features and improvements will be added in the future!!! STAY TUNED@wolffungame pic.twitter.com/emXcYFk6Bu

The launch of the Thetan Arena Custom Battle comes after the release of a new update on the 1st of March. As mentioned earlier, this new mode will serve as a means of creating private mini tournaments amongst selected players. Despite the official release, the game is reassuring players of more improvements in further updates.

This includes the introduction of royale solo and duo battles. To join or create a custom battle, you must attain the Recruit rank. More so, this ensures that you have adequate gaming experience.

In this version of custom battle, there will only be 4v4 matches. They include Deathmatch, Tower Destroy and Super Star. Whenever you host a tournament, you can invite and kick out other players. Users can select both NFT and non-NFT heroes to participate in this mode.

All these in-game characters will be at their MAX LEVELS and MAX TROPY CLASSES. More so, this will ensure that the combats are balanced and fair. Furthermore, those who win will not be getting any reward.

On the 3rd of March, Thetan Arena announced the need for an emergency update. Although it was initially scheduled for 30 minutes, the maintenance was later extended. During this period, players could not login to play the game. Three hours later however, the game announced the completion of the update. Also it didn’t give much details about the need or process of this upgrade.

Thetan Arena is an online arena and esport game based on blockchain technology. It combines the play to earn model of gameplay with the action/adventure features of video games. In this game, you can gather your friends and form a team, battle with others. While doing this, users get to earn money with just their skills. The game offers an increasingly fast-paced course of gameplay. Like most blockchain games, players can own and trade in-game assets as NFTs.

Thetan Arena is designed to combine your personal and teamwork skills. Challenge yourself with various game modes, from classic MOBA tower rush to battle royale. Build your team and try to bring down their nexus (tower). This game is developed by WolfFun video game studios. It is currently supported by the Kardiachain blockchain. It is available on PC, iOS and android devices.