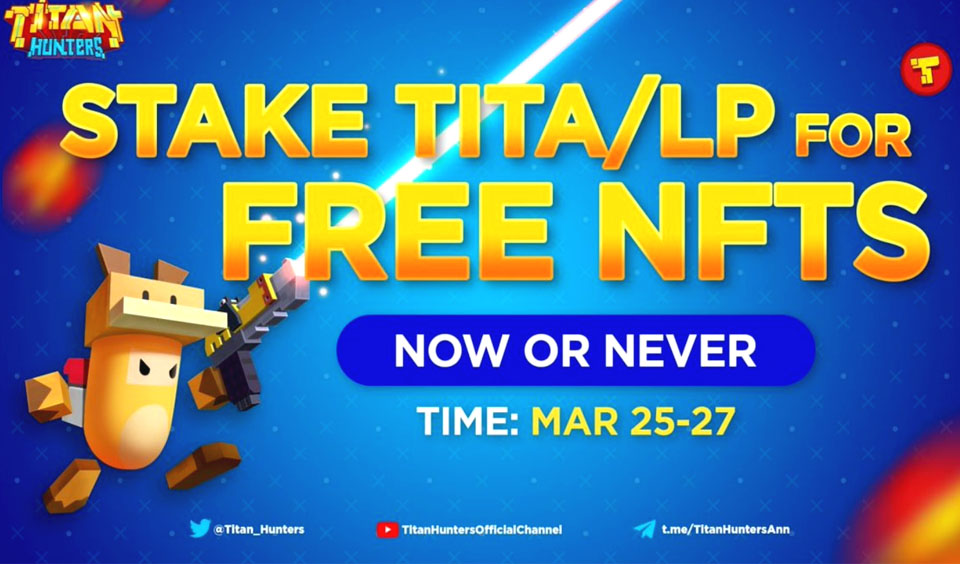 Titan Hunters, the mobile MMORPG NFT-based game platform, has announced a 3-day staking event starting on March 25 to March 27. Participants will be able to stake $TITA for a chance to win free NFT Guns.

They can opt to lock in their $TITA or LP tokens for TITA/BUSD pair. It should be noted that different staking options grant users different chest rewards.

The staking will be held for three months after which stakers will receive a 100% of the tokens they deposited at the commencement of the event. There are limited chests available and they include 500 Immortal Chests, 100 Radiant Chests, and 10 Infinity Chests.

🙀 There is no better way to get free NFT Guns other than staking $TITA. Don’t miss your chance!

How to Stake TITA/BUSD LP Tokens

The option of staking TITA/BUSD is the easiest on your wallet. It is 50% of what you require to invest in staking $TITA. It offers numerous benefits while also sustaining the liquidity pool of $ TITA tokens. Titan Hunters recommends this staking option to all participants. The lock window for this staking option is also three months.

What are Treasure Chests?

Treasure Chests are locked up in the deep below the Earth’s surface and contain Titan-slaying weapons. NFT minters have come to the rescue to successfully extract these weapons from the deep and reveal the long-lost treasure inside. The Treasure Chests contain three powerful weapons, among others.

These three are Grenade Launcher, Shotgun, and Pistol. These weapons are the most popular with Hunters because of their utility and sheer strength. Hunters use pistols for their decent damage prowess and flexibility and use Grenade Launcher and Shotgun for their potential massive damage at very close range.

How to Participate in the Stake-to-Earn Event

Participants have to stake a fixed $TITA amount to acquire the mysterious NFT Treasure Chests. While minting, you have the chance to find any of the three mythical treasure chests. These are Infinity Treasure, Radiant Treasure, and Immortal Treasure. When you stake more, you get rarer NFT chests. To participate in the staking event, follow the steps below: