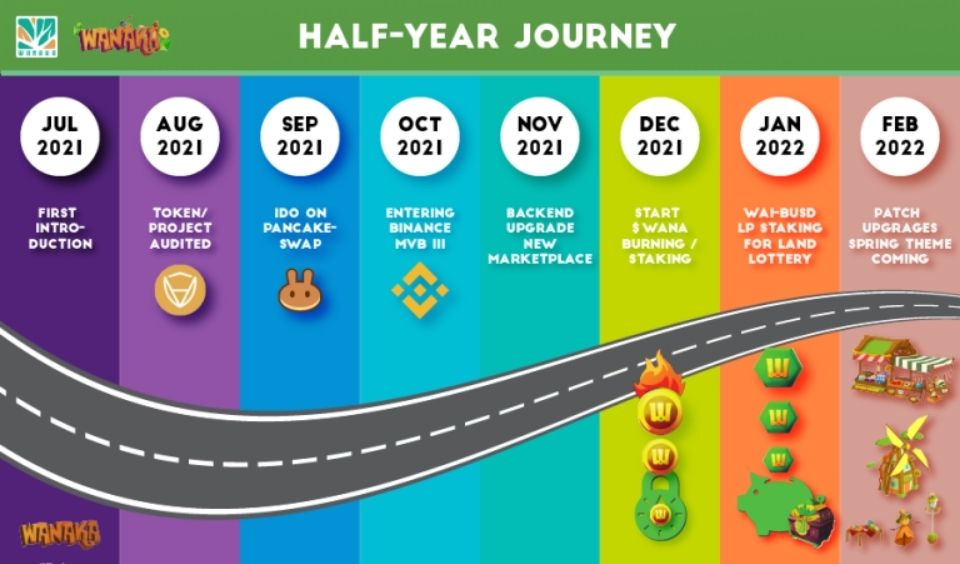 Wanaka Farms celebrates half a year of its launch. While celebrating its six months of existence, it also highlights its achievements over this period. The game also promises to continue further developments in 2022. Announcement of this update was made via the Wanaka Farm blog. Here are the details of the Wanaka Farms Half-Year Journey.

👨‍🌾6 months old and yet we still have a long way to go… #GMI #wanakafarm #AAA #WAGMI https://t.co/zRM3vt6UMT

Since its launch in July 2021, Wanaka Farms has come a very long way. After its launch in July, Wanaka audited its project and the governance token for the game in August. In that same month, it also entered into partnerships with 15 key partners. Wanaka Farms also partnered with 3 decentralized launchpads for its IDO.

By September, it launched its IDO on PancakeSwap. By the 20th of September, there was a closed alpha testing exercise. Alongside his testing was the sale of LANDs. By October, Wanaka announced its entry into the Binance MVB III. October was also the month of the official game launch. In that same October, it upgraded the server to serve the 100,000 Wanaka Farmers. The game also unveiled the Wanaka launchpad.

By November 2021, daily quests mechanism was added to the game. November was also the time of the 2nd Time Game pre-launch. By December, Wanaka added the new weekly quests. It also adjusted the daily quest mechanism to ensure stability. By December, the game announced the onboarding of two new advisors. By February, it released the roadmap for the year. This includes scholarships, Spring Theme and New Land Sales.

Plans for the Future

Wanaka has obviously made significant progress since its launch. Despite the claims of limitations, the numbers speak for themselves. One of such is the 60,000 daily active players that is still growing. This goes to show that Wanaka enjoys immense community support. Wanaka Farms’ team is one of the few games in the GameFi industry with complete gameplay and smooth operation after a period of maintenance. This is evident in the transition from the numerous upgrades.

Wanaka promises to stick to its roadmap going forward. It also wants to thank its players and investors holding the $WANA token. Speaking of this achievement, a Telegram group member had very positive words. Below are the words from Mr. Tamagotchi:

That is the point. I have never said that DEVs are perfect, but one of the things that has impressed me the most was their attitude in admitting their mistakes and taking responsibility. In almost all the other projects that I was involved in, the DEVs controlled the economy and when it fell they blamed the community and left with all the money. Here I see responsible DEVs, professionals focused on game development who do not control the economy. I like that. And controlling the FUD has been one of the best measures they have taken.