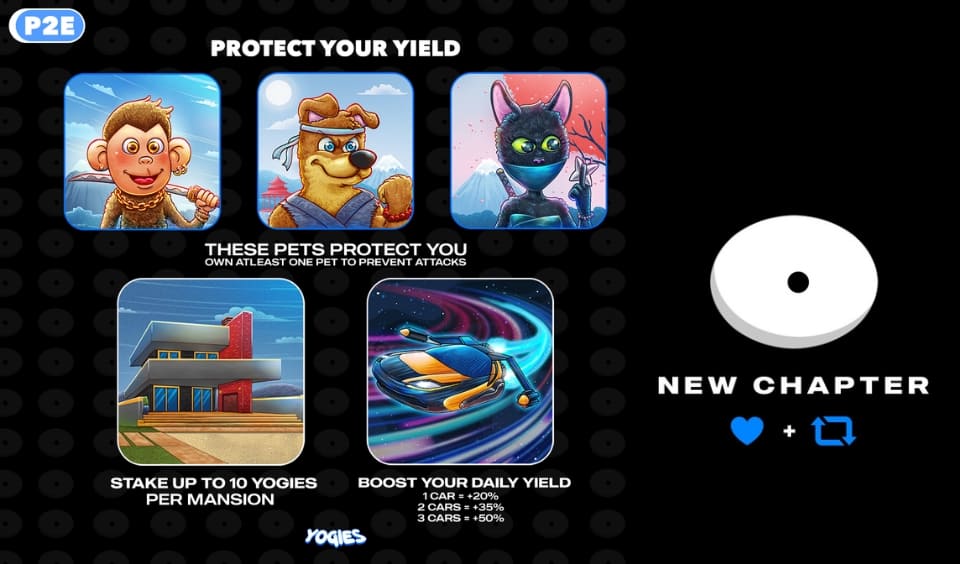 Following the deployment of its play to earn game, Yogies is giving players insights into what to expect. It also announced that there has been a significant level of progress since the game’s release. Here are all the details.

1 RT will get Guaranteed FREE Mint.

1 RT will get Guaranteed FREE Mint.

Features of the Yogies Play to Earn Game

The Yogies play to earn game will feature mansions, flying cars and security pets. During the course of gameplay, players can attack other holders. Also, $Gemies is the in-game utility token that players will use to make purchases. Below is a breakdown of the different features you will experience while playing.

These are the avatars that players will be using during the course of gameplay. They include Genesis, Very Important, Vault Normal and  Normal Yogies.

Surely, the idea of cars that can fly is enough to lure players. Depending on how many you own, these NFTs multiply your Daily Yield. Users with one car will get a daily boost of 20%. Should they have 2, they will get a 35% increase in return. While those with 3 get 50% more in daily yield.

At the moment, security pets do not really have many use cases within the Yogies play to earn game. At the moment, their major function involves protecting your daily yield from other holders. Just like mansions, you can purchase them using $Gemies. Nonetheless, they remain one of the most valuable holdings in the collection. This is because they will be assigned more utilities with further updates.

This is the underlying utility token of Yogies metaverse. It is through this token that players will purchase items from the store. Users will also receive $Gemies as rewards of Daily Yield.

Every 24 hours, players can attack any holder of their choice. However, they can only attack those without security pets. Here are the rules for attacking other Yogies:

A Sneak Peek into NEAR’s Outlook on Web3 Gaming