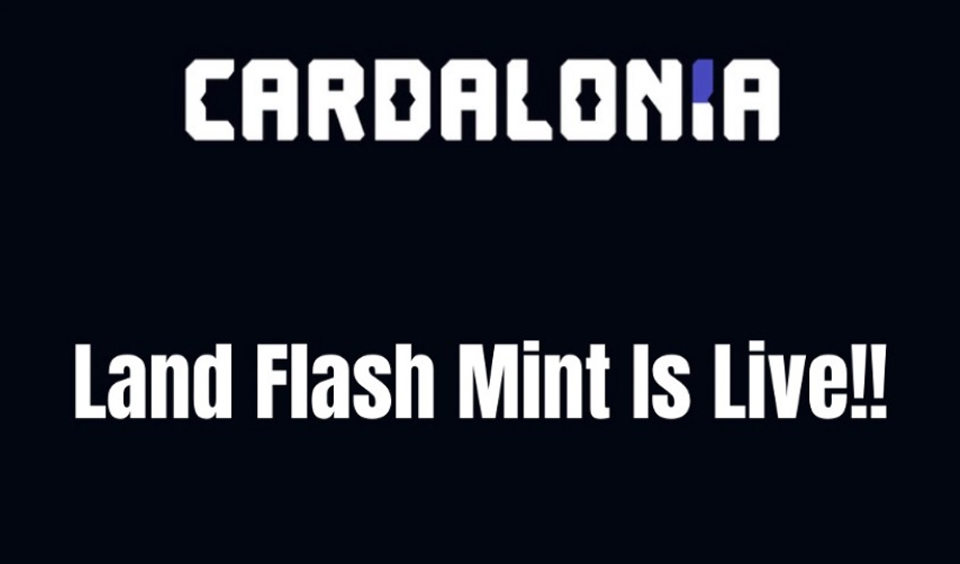 A web3 play-to-earn game platform on Cardano, Cardalonia, has announced the start of its Metaverse Land Flash mint and details of how to mint. The event is open to both whitelisted users and the public.

However, you must have at least 7000 $LONIA to participate in this round of minting. Interested participants can buy the $LONIA token from P2pb2b.io or Bitmart.

After purchasing the tokens, users can move them to a Cardano-compatible wallet, such as Flint Wallet, Yoroi, or Nami Wallet. With the token, you can go to the official Cardalonia vault and click on the “Buy Land NFT” button to start minting.

You will get a QR Code and an address, and you have to send multiple 25 $ADA to buy 20 NFTs in one transaction. Participants can purchase as many as they want with multiple transactions. It is worth mentioning there is a limit per transaction, which is 500 ADA (20 NFTs) per transaction.

According to Cardalonia, the flash mint targets the minting of the remaining 56% of the unminted Cardalonia Metaverse land parcels allocated for the whitelist minting. This round of minting is different from the previous whitelist minting because only users with a minimum of 7000 $ADA can participate by visiting the vault.

The game platform announced that the Flash mint will last 15 days and there are 13,960 allocated Cardalonia Land parcels available to people to mint.

What to Know About Cardalonia

Cardalonia is a digital world offering players the platform to build, own, and customize their experiences on the Cardano Blockchain. It is a play-to-earn game platform where users can buy, personalize, and breed Cardalonia Lands and Avatars and sell them for profit. They can also stake $LONIA to earn rewards.

Users can also join a clan to complete missions and quests and have a chance to win rewards. Landowners have complete control over what they can build on their land parcels. According to Cardalonia, the game platform is on a mission to create a new Metaverse experience for users on the Cardano Blockchain.

What Are The Different Forms of NFT Sales?