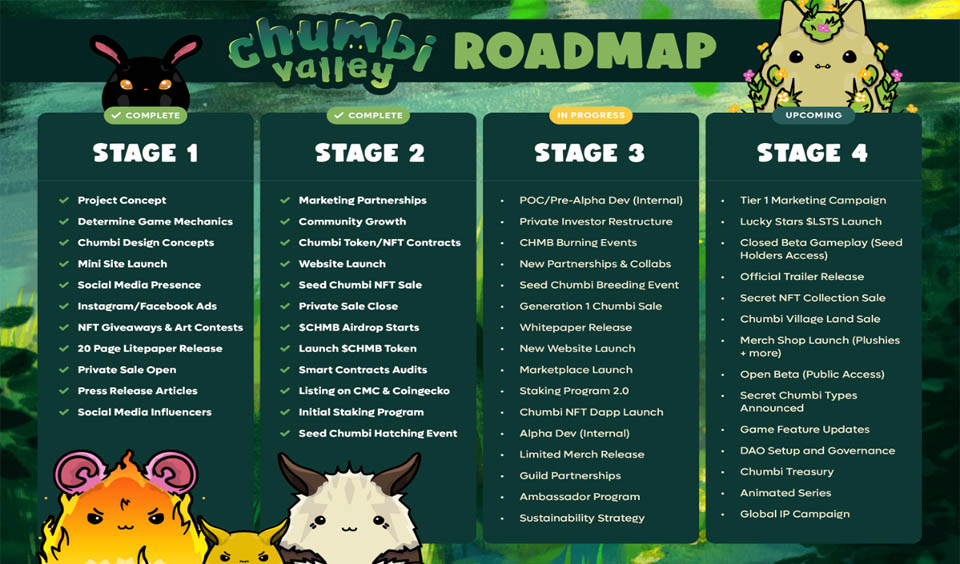 Chumbi Valley, a next-gen play-to-earn NFT-based game on Polygon and BSC, has published an update on its project roadmap.

According to the game platform, it has published an updated roadmap to offer transparency on the current status of its project and also highlight the milestones planned for the game Metaverse. The updated Chumbi Valley roadmap reflects the latest priorities of the team using a phases model instead of a timeline.

We have updated our project roadmap!
It’s going to be a big few months 🔥

Highlights of the Roadmap Stages of Chumbi Valley

According to Chumbi Valley, the game platform is currently in the third stage of its roadmap and the team is focused on the “Pre Alpha” game development. Expected milestones for the project have been categorized into different stages.

Highlights of the Progress So Far

The Chumbi Valley team is currently in the process of redesigning the game’s website and developing the marketplace. It is worth mentioning that the currency for all transactions on the marketplace at completion will be $CHMB. Users will be able to buy different items, including Chumbi NFTs, land décor, and Cosmetics, among others.

Chumbi Valley will announce the launch of its breeding event and NFT sale well ahead of time to prepare Seed Chumbi owners and the community for participation. The team already developed the breeding portal.

The portal has also been tested and reviewed internally. The whitelisting is also currently in progress. Interested participants can access more information about the whitelisting event through the Chumbi Valley.

Development of the Pre Alpha Game

According to the game platform, it currently focuses on creating a test world where the core game mechanics of the game can be created and reviewed.

Some of the elements currently being worked on include World and terrain rendering, Player and Chumbi animations, UI/UX, Farming, Control, Effects, and lighting. The team is also making progress on the new game development partner of Chumbi Valley, the NonceBlox Metaverse Team.

The team will hold two $CHMB burning events. The first is the Gen 1 Chumbi Sale will feature a $1 million worth of $CHMB burnt. The second burning event is still in its development stage and will be announced with time.

Following the success of the first staking event, the team is currently developing a new staking portal. More details about this will be released in due course.

Gala Games and Unity Technologies to Build the VOXverse