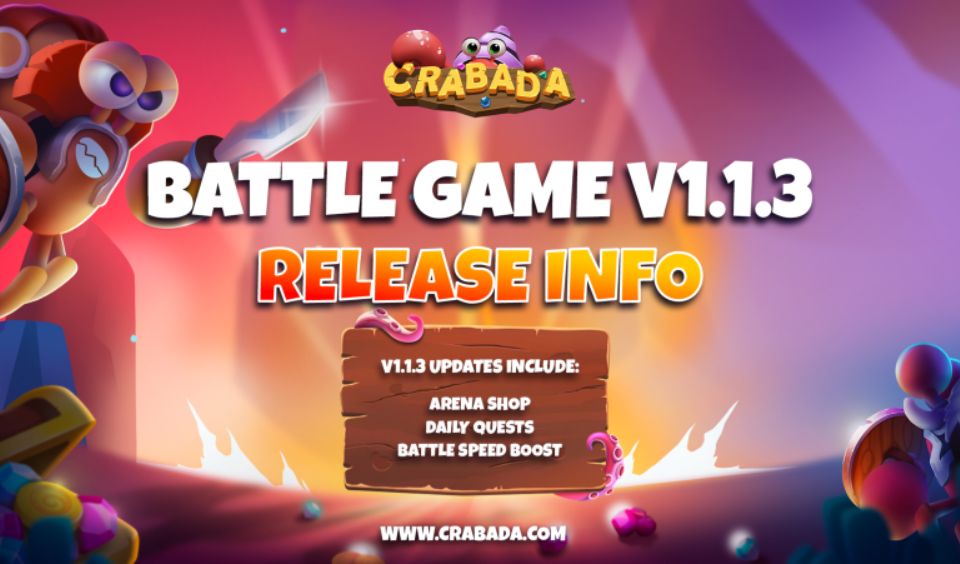 Crabada announces the impending release of the battle game V1.1.3 update. This comes after launching arena challenges for week 18. This upgrade will feature the introduction of Daily Quests, Arena Shop and other upgrades. While issuing the update, the team reminded players that not all the improvements would be available on mobile applications. This is because App Stores may take longer before approving them.

Speaking of Week 18 Arena, there were also updates to the reward mechanics. This includes the addition of Material Chests to the prize pool. The team also removed Arena Tickets from the Guardian Bounty. They are replacing them by increasing the Crystal Shell drop rates.

The Crabada Battle Game V1.1.3 Update will debut on the 2nd of November 2022 at 7:00 AM UTC. When this upgrade drops, players can enjoy new and exciting g features. One of such introduction is the Arena Shop. With this addition, users will now get Arena Medals for winning battles in the Arena. They can use these assets to purchase different items in the store.

These include Pearls to power up their avatar, Food, Spinach, Dragnets and Crystal Shells. Players also acquire up to +15 Powered-Up Equipment and Chests of different rarity levels. Meanwhile, the medal players can win depends on their current tier.

Below is a breakdown of the different tiers:

Note: Any equipment you 0obtain from Chests bought from the Arena Shop expires within one week of opening the mystery box.

As mentioned earlier, Daily Quests are now part o the game. Every day, the system will issue daily assignments. Anyone who completes these tasks will receive Crystal Shells and Daily Milestone Gifts. In addition, gamers will receive 20 Milestone Points for every Daily Quest they successfully undertake.

Below are some tasks that can appear as the Daily Quests: