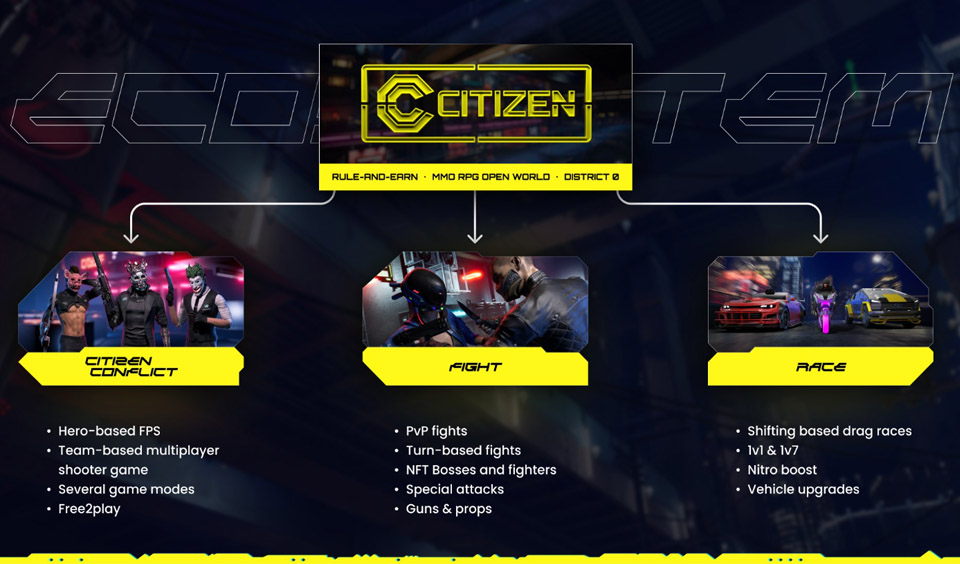 The MMORPG Futuristic game metaverse, Crypto Citizen, offers an exhilarating free-to-play blockchain-based gaming experience in its metaverse. The Crypto Citizen is a novel rule-and-earn MMORPG game metaverse offering a fascinating storyline. It delivers a futuristic-looking world called Ether Island and also an exciting gaming experience where players can fight, race, or shoot at each other through different game modes.

The game metaverse was built originally in Unity but was later moved to Unreal Engine 5, making it easier for players to use with numerous options. Although it is a blockchain-based game, it is also free-to-play and open to everyone.

According to Crypto Citizen, the team is creating NFTs using the VRF technology of Chainlink to fairly and randomly generate the skills and attributes of NFTs. Gamers will be able to explore different gaming possibilities in the open-world metaverse. Players can win loot boxes, construct buildings, collect resident taxes, rent properties, stake, and earn $CCASH.

Highlights of the Drag Races Game

This is a racing game that offers players the chance to earn $CCASH as they participate in Drag Races using different powerful vehicles. Each vehicle is an NFT and has its unique design, appearance, attributes, and upgrading options. The game has 1v1 and 1v7 and takes 15 to 20 seconds per game. When you compete and win against other players, you earn CASH and XP. The game has four car types – common, super, epic, and legendary, with each having its unique attributes.

These are fighting games where players engage 3 fighters or bosses in a fight. Each fighter has three attributes, HP, defense, and attack. When you enter into a battle, you see an introduction showing your three avatars and their stats and the stats of your opponents. The player with the highest speed begins the fight.

This is the latest addition to the Crypto Citizen’s ecosystem. It is a hero-based FPS, team-based multiplayer shooter game. Players are assigned to 2 teams of 5 players each. Everyone in the game can choose from different heroes and game modes. Each hero comes with its skill kit that determines its built-in attributes, including health points, running speed, and primary attacks, among others.