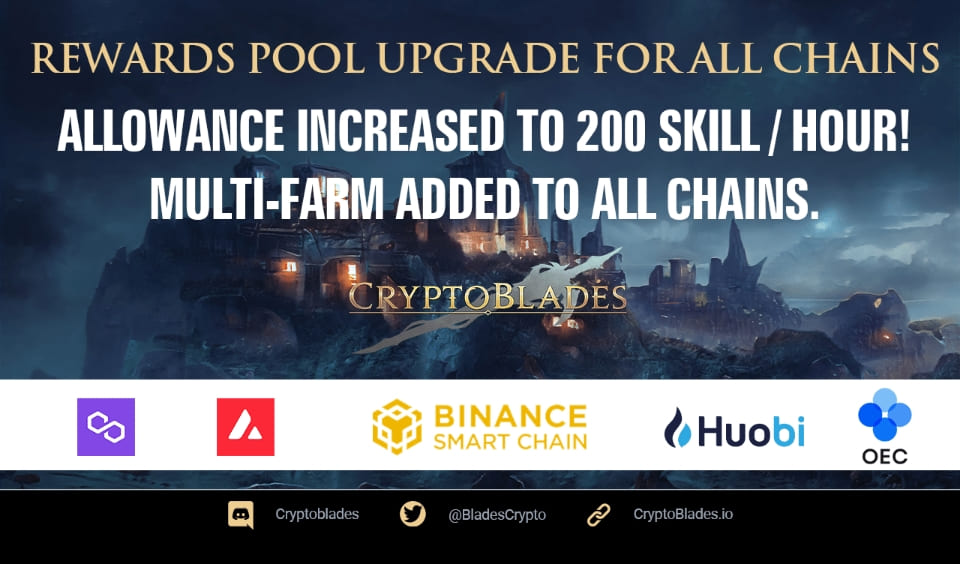 It is the community that owns and regulate blockchain games. This is because they hold the governance tokens that regulate these games. In this regards, Cryptoblades is appreciating its community by upgrading its reward pools. It will be increasing the reward pools hourly allowances by 10×.

Details of this increase came via the Cryptoblades Discord Server. This announcement also comes after the game issued a tutorial video on how to claim partner tokens as rewards. Here are the details of this update.

Details of the Increase in Reward Pool Hourly Allowances

This update comes much to the delight of Cryptobladers. Following this upgrade, players will now earn 10 times more rewards. Even better, this reward system applies to all chains on the Cryptoblades pools. Previously, users can earn 18.75 SKILL per hour. With this update, they will be earning 200 $SKILL per hour. This is actually more than 10 times the previous amount. Also, this increase in reward pools hourly allowances will allow players to win regardless of the time of the day that they play.

Speaking of all chains in the Cryptoblades Kingdom, the game will be adding Multifarm to them. For starts, HECO and OEC will get 1,000 $SKILL. Furthermore, AVAX as well as POLY will follow suit and also receive 1,000 of the game’s native token. The distribution of this token will take place over a 30 days period for all four chains.

For some time now, the game has been improving the reward system for users. One of this involves the inclusion of partner tokens in their reward pools. As mentioned earlier, the game also gave a guide that players can use to redeem partner tokens instead of $SKILL. Altura is the latest and fifth token to join the Cryptoblades reward pool. The game wants to reduce the pressure on $SKILL and give value to its partner tokens. It is also working towards bringing more partnership to its Kingdom.

CryptoBlades is an action and web-based gaming platform that uses the play-to-earn model. Players earn $SKILL tokens when they defeat their enemies. Users can use their rewards to create weapons of various levels of power and mint characters. Doing this will increase their and also gain experience. They also get to own their weapons of combat as NFTs. In addition, users can earn more $SKILL as their weapons become more powerful. Players can sell or trade their tokens and NFTs on the Cryptoblades Marketplace. The game uses smart contracts running on the Binance Smart Chain.