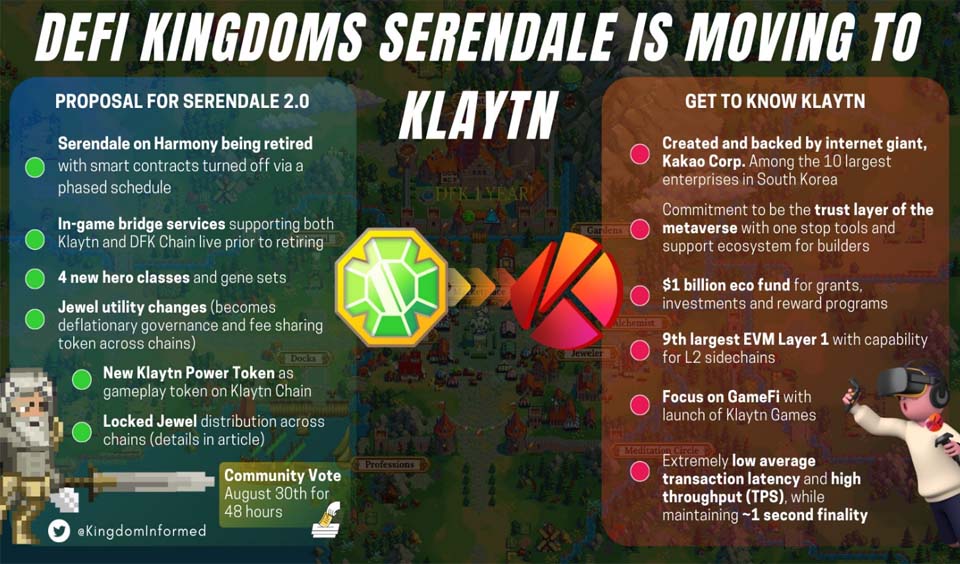 The cross-chain gaming platform, DeFi Kingdoms, has announced it is time for its Serendale on Harmony to retire and launch on Klaytn. Klaytn is an open-source Level-1 public blockchain built for future Metaverse.

The platform is built to provide enterprise-grade performance and scalability, which is crucial to the delivery of a smooth Web3 experience across different touch points. Currently, there are many GameFi projects on Klaytn, including Cross Worlds.

The Serendale realm is moving to @klaytn_official. The @DefiKingdoms team put a lot of thought and planning in and the proposed Serendale 2.0 changes is set for community vote on August 30th. #Defikingdoms #Klaytn #AVAX #Blockchain #Metaverse #GameFi #gaming #NFTs #NFTGaming pic.twitter.com/KV6rkXub9u

What Changes can Users expect with the Movement of Serendale to Klaytn?

Retirement of Serendale from Harmony

Launch of Serendale 2.0 on Klaytn

Utility and Changes to the JEWEL Token

The DeFi Kingdoms will hold a voting event on August 30 to deliberate and vote on this proposal. Community members can vote with xJEWEL from Crystalvale and Serendale and xJEWEL from Gardens and Heroes. For the proposal to pass, it requires a majority vote.