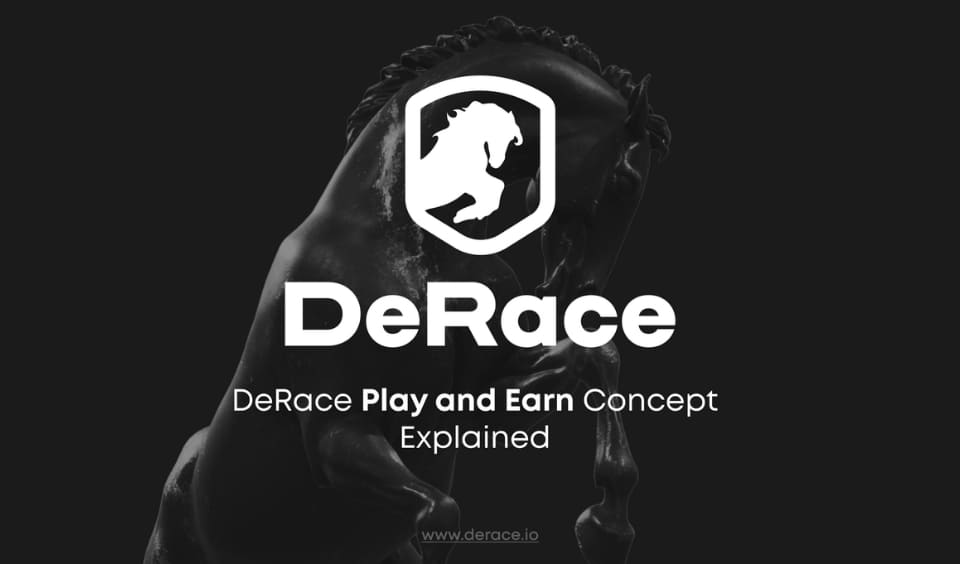 Horse racing is an age long sport. Besides being a sports, it was also a major form of gambling. Individuals were betting on which horse to finish first. Till today, people still paces bets on which racehorse will win the race. DeRace has come to update this ancient sport with the help of blockchain, the users of this project will be able to own their own NFT horse, bet on races or even have a racetrack.

DeRace is a horseracing game that utilizes the play to earn model. In the course of gameplay, players can participate in horse races and earn rewards while doing so.

This is the first game to combine video gaming, horse racing and sports betting. It uses the random number generator and blockchain technology to ensure a fair, credible and transparent experience for players.

The major difference between DeRace and other horse racing games is that this game puts its community first. It offers players total control over in-game assets. Here are some of the features of DeRace.

There are various horses in DeRace, players can buy and own them as NFTs. They include the Arabian, French Trotter and American Quarter horses. Each horse has visible and hidden traits

. The visible traits are features like sex, color, shape, breed, breeding and racing cool-down. On the other hand, features like stamina are hidden. The reason why they are hidden will be explained later in this review.

The GA uses a Random Number Generator (RNG) to chose from which genes of both parents to create the new horse. The RNG then creates features for the new horses with a variation of -/+5 from both parents.

Like in real life races, each session requires a fixed number of horses. Horse owners can join in races if they pay the fee set by the owner of the Hippodrome.

Every Hippodrome it’s divided in 10,000 tokens and players can own part of these racing centers. Anyone with 5,000 tokens in a particular drome owns 50% of it. With this 50% ownership, you get the right to become the administrator. Administrators are also known as Bookmakers in DeRace. Bookmakers organize races in their Hippodromes.

They also decide when the race will take place as well as who can partake and up to them to decide if they want to open the event to the public or only want players to meet certain requirements.

Besides horse racing, players can win and earn tokens by gambling on other races. Every upcoming race is put on the dashboard for everyone to see. You can filter them and choose the ones that interest you.

Like the races themselves, betting is also automatic. The game’s algorithm calculates the betting coefficients. At the end of a racing event, the system automatically pays winners directly to their accounts.

There is an in-game marketplace where players can perform various trades. Unlike any other blockchain game, players can trade their assets in-game as well as the external NFT marketplace.

DERC is the native token of DeRace ecosystem. In this regard, every gameplay reward is paid in is in DERC tokens. It is an Ethereum based token and it is only available on DAO. Unlike most other blockchaun games, there are no seperate in-game tokens. In addition, players will use this token to buy and breed horses.

How to Earn DERC?

Besides hosting and partaking in horse racing, there are other ways to earn in DeRace. One simple way is to watch advertisements during the course of gameplay. Another medium through which players can earn is by predicting the outcomes of races. As mentioned earlier, you can sell these predictions on the marketplace.

DeRace is on a mission to ret=store faith in horse racing and gambling. Many of the current gambling options are shady and do not favour players. This game is changing the atmosphere of gaming and the NFT market. It is giving players the ability to fully create and enrich their in-game assets. There is so much focus on the community regulating the game that even racing event is organized by community members.