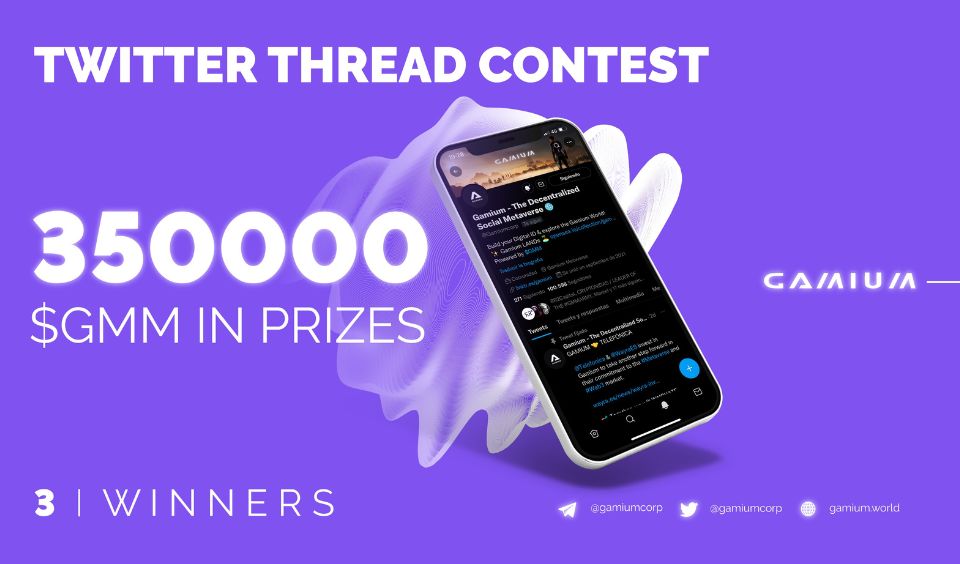 Gamium – a decentralized social metaverse has launched a Twitter Thread Contest. This update comes after an announcement of an investment from Wayra. From now till the 1st of August, anyone can win from the massive prize pool.

Explain what Gamium is in your own words in a Twitter #thread 🧵 to win GMM tokens!

How to Participate in the Gamium Twitter Thread Contest

The Gamium Twitter Thread Contest is a competition that promotes awareness about this interactive virtual world. Unlike most other campaigns, it is open to everyone who wants to join. It does not matter if you are currently a player or not. To participate, follow these steps:

There is a massive 350,000 $GMM reward up for grabs. However, it will only be distributed amongst three lucky persons. From the 24th of July to 12 PM (CET) on the 1st of August, users will get the chance to win any of the following :

Ensure that your message is qualitative because it will count towards your score. Speaking of which, you should also mention the corporate partners in your tweet. This will help to increase your ranking. After tweeting, invite your friends and followers to like and retweet it. The reason is that the amount of engagement is also part of the rating process.

Gamium recently entered into a partnership with Telefonica Innovation. This investment will be made through Wayra, a subsidiary of this telecoms company. With this funding, the establishment takes its first steps into the world of web3. However, this step is not surprising. Considering that organization launched the Open2metaverse to look for companies developing technology for the metaverse.

Following that rally, 135 startups joined from 1625 that were analysed globally. In addition to working with the $GMM founding company, Telefonica is also working with Meta to create a metaverse innovation hub. This will serve as a medium to accelerate network and device readiness.

Sepaking about this collaboration, the Co-Founder and Co-CEO of Gamium stated that this move is a reiteration of the company’s commitment to promoting digitization. He also stated that the firm would continue to work with private institutions with like minds to accomplish its goal. Here are his comments:

“At Gamium, we think that the future lies in building platforms where the central element is the user, allowing them to control their data and privacy. For this reason, we developed our metaverse based on an identity that can be used across other applications and metaverses. This alliance with Telefónica is an endorsement of our mission and demonstrates our willingness to go hand in hand with leading companies in this adventure”.