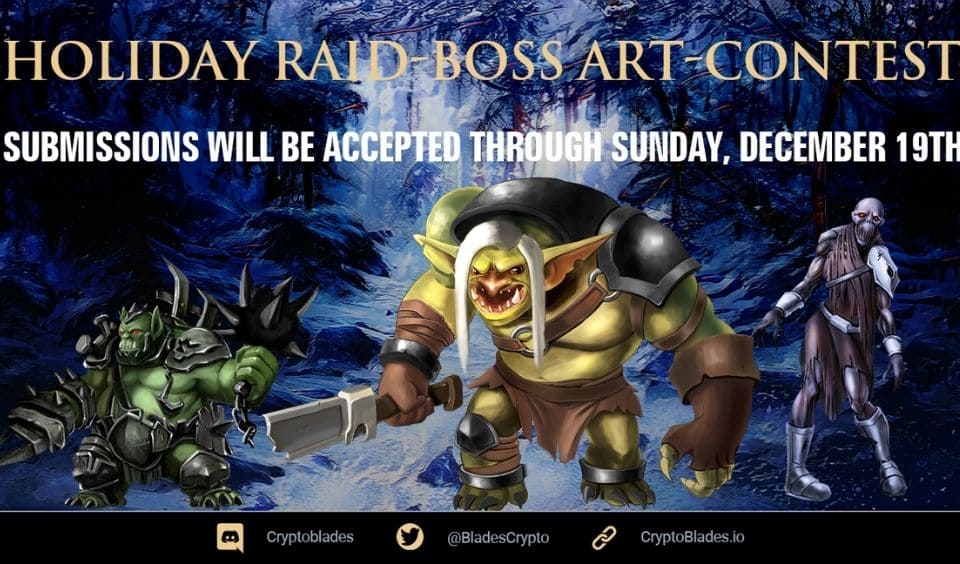 Its the holiday season and everyone is gearing up for it. With the end of the year getting close, Cryptoblades is signing out in style. Join in the Cryptoblades Raid Boss Art Contest. The game made the announcement via their discord channel. It also gave other updates via the announcement. Here are the details of this contest.

😊We are hosting an art competition for new raid boss designs!

📅The contest will end on Sunday, December 19th

The Raid Boss Art Contest is set to run from the 2nd of December to the 23rd December 2021. Interested graphic designers will have to come up with characters that the game will use for nee raid bosses. This contest is not up for general voting. Instead, the Cryptoblades team will do the assessment and voting. After the assessment and voting, the team will select five lucky winners. Below are the prizes for the various winners:

Join the Cryptoblades Discord Channel to get more information. To submit your creations, use this link: https://forms.gle/Df6BbXRwfzRS1Mo19

While the art contest is ongoing, Crytoblades is currently working towards expanding their gameplay experience. To this effect, it is developing the game’s metaverse. The metaverse is called Omnus. This metaverse development. is also part of the reasons for this art contest.

Metaverses are gradually becoming a trend in blockchain games. It is no surprise that this game is looking to create its own. Omnus is full of new and exciting blockchain projects that players will get to explore while they play the game. It also provides players with multiple ways to earn rewards, not just SKILL. Below are more details of the means of earning rewards in the Omnusverse:

Cryptoblades also released a trailer of the Omnus Metaverse on their YouTube page. Thiscomes off the back of a Metaverse Competition.