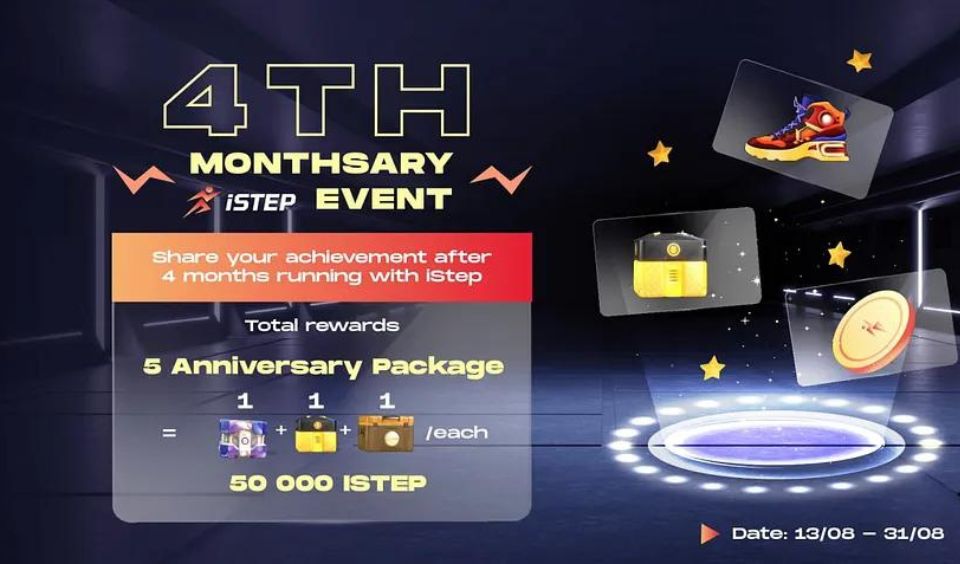 Four months ago, iSTep launched its move-to-earn game. Since then, it has grown in community size. In this regard, the team is launching the 4th Monthsary Event to celebrate its milestones. Furthermore, this is also to appreciate its supporters that have stood behind the project. This contest will run from the 13th to the 31st of August 2022. The contest will begin and end at 00:00 UTC on the said date.

🔥 4TH MONTHSARY ISTEP EVENT 🔥
📸 Share with us your achievement after 4 months running with iStep.

Speaking of acknowledgement, there are several benefits to participants in this anniversary. The team is setting 50,000 $ISTEP aside for the prize pool. There will be a total of ten winners. In addition, there will also be five anniversary packages for the top users. Each contains 1 Running iBox + 1 Jogging iBox + 1 Walking iBox. The others who make the cut will get to share the general rewards.

How to Partiicpate in the iStep 4th Monthsary Event

The essence of the iStep 4th Monthsary Event is to encourage active gameplay. As such, it will incentivize users who have been playing the game consistently. To stand a chance of winning, follow these steps:

Interested participants must join the iStep Telegram Channel and Discord Server. The submission will require that you submit your username on those platforms. You should also follow the official Twitter account to make your vote count. More importantly, ensure to submit the correct wallet address. This is where the rewards will be directly distributed after the team scrutinizes all entries. If you are interested but have not achieved much during gameplay, you can begin playing now and reach more milestones. After which you can upload your achievements.

Shortly before announcing its anniversary, iStep issued an update to its marketplace. This upgrade makes it easier to trade NFTs. Merchants will no longer have to cancel a listing to change its price and can now do this directly. The team also issued a tutorial to guide users on the entire process.

Summoners Arena Launches the Gathering of the Guardians Event