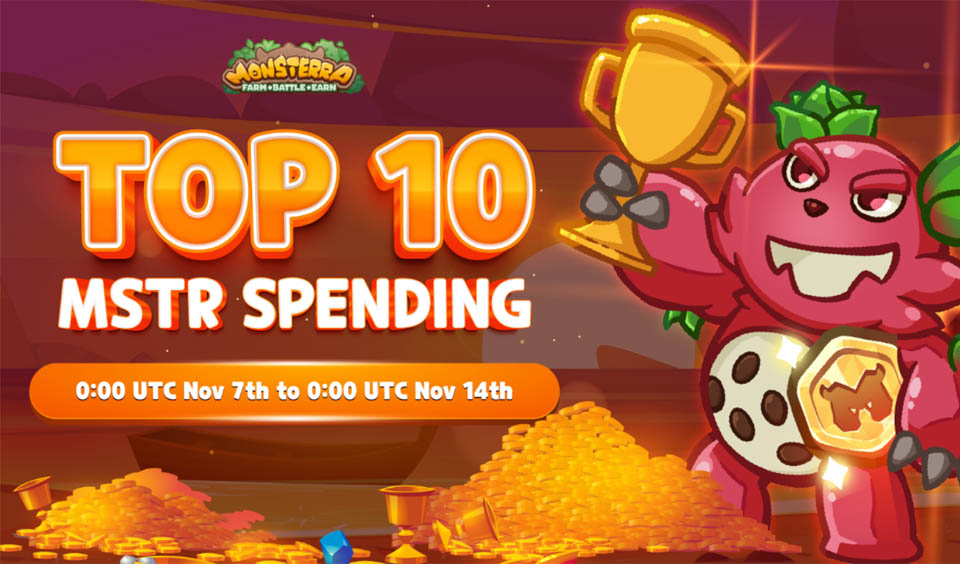 The number one multi-chain NFT-based game with a free-to-play-and-earn mechanism, Monsterra Game, has announced the launch of the Monsterra Top 10 MSTR Spending Campaign. The event is slated to start today, November 7, and run until November 14, 2022.

It is worth mentioning that Monsterra is currently running an MSTR Accumulative Spending campaign. According to the game platform, its objective is to maximize gaming benefits for its larger community with the new campaign.

They can leverage the valuable defensive plots, including the Training Ground, available in this event. Players and token holders who spend more MSTR will gain more special rewards.

What are the Rules for the Top MSTR Spending Campaign?

Participating players are required to spend MSTR in Monsterra Game to attain reward milestones. The spending can cover Conversion Fees, Breeding Fees, and Unlock Fees. When a player spends a minimum of 1000 $MSTR, they become eligible to join the leaderboard of the Top MSTR Spenders. This gives them the chance to get special limited rewards.

Highlights of the Reward Structure

As mentioned, the campaign starts today and will end on November 14, 2022. Interested participants can begin to spend their MSTR now to stand a chance to win the rewards.

Why Participate in the Top MSTR Spending Campaign

This new campaign offers players an opportunity to become proud owners of Monsterra defensive plots of Land. Players can spend their MSTR tokens on games and earn extra rewards apart from the in-game assets they win when they complete tasks and win battles.

Participating in this event gives participants an edge to acquire more in-game assets with a high return on investment in the long term.

What to Know about Monsterra Game

Monsterra is a multi-chain NFT-based game featuring a free-to-play-and-earn mechanism on OKX, Avalanche, and BNB networks.

Set around a fictional world, the game revolves around property building, farming, and battling other lands using magical creatures known as Mongen. Players win in-game assets while playing and can trade the native token, MSTR, in the marketplace.