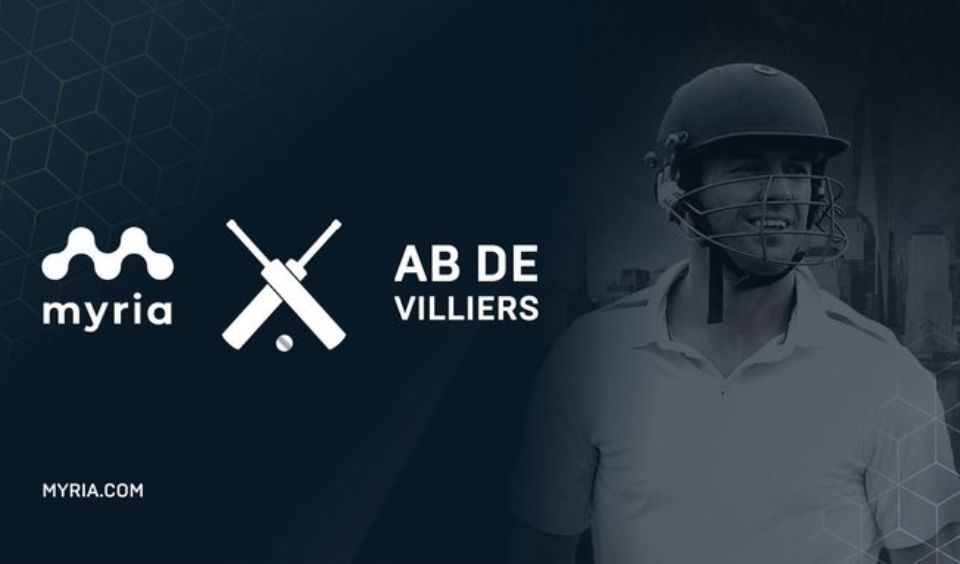 Myria – a gaming ecosystem powered by Myria’s Ethereum L2 scaling solution is teaming up with AB DE Villiers. The GameFi outfit will be working with the legend to launch a NFT cricket game. This comes after an earlier teaser giving hints as to a prospective partnership with a sports player. The clue left everyone guessing, till it made a reveal later on.

We are thrilled to be partnering with cricket legend @ABdeVilliers17 and to onboard billions of cricket fans all over the world into the Myria ecosystem #myriagames https://t.co/IRPEj9D0XT

With the collaboration, the gaming outfit is certain that Mr. 360 will onboard new persons to try out web3 games. Enthusiast are banking on his 39 million global followers. With some saying that the blockchain development company has hit the jackpot with this deal. As it will become the first celebrity backed blockchain gaming. It will be launched on Myria’s platform.

The NFT cricket game that will be the product of the Myria and AB DE Villiers partnership is set to launch in Q2 2023. The first setup will be a web version. After which there will be formal releases for both the android and Apple app stores. However, the team did reinstate that this was only an estimate. As there may be changes in the forecast.

One thing that seems certain is that the new product does not yet have a name. As a matter of fact, the team is putting it up to the community to decide. In a few weeks time, there will be a poll containing prospective names. Members will decide by voting on which one they prefer the most.

Speaking of the game itself, it will employ the play to earn mechanism. As such, cricket fans will get rewards for their passion. However, the selling point of this project is not the reward system. It promises participants fun and exciting gameplay that will excite all types of players.

Speaking of his collaboration with Myria Games, DE Villiers gave reasons for choosing the company. Stating that he shares similar visions with it. Here are the words of Mr. 360:

“The main thing is that there is no compromise. My cricket game will be fun and exciting just like a match on the field, but it will also empower digital asset ownership. Myria shares my commitment, and together we will bring new cricket experiences to my fans.”

A spokesperson for the gaming outfit also reaffirmed these words. Submitting that the sports legend could have chosen any other outfit. But prefers them due to their “innovative infrastructure, and dedication to empowering players”.