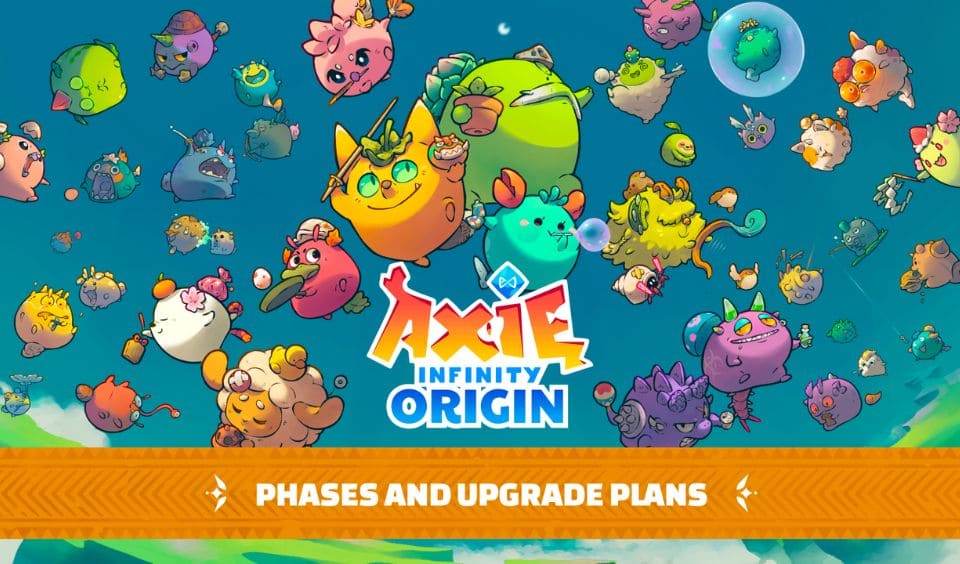 Axie Infinity is unveiling the Phases for the Origin ecosystem. This comes after it onboard the first beneficiaries of the Builders Program. While making this announcement, it also issues detailed upgrade plans that the team will implement going forward. The upgrades will ensure better user experiences for players.

Progress on Origin (V3) is humming along and so far we’ve seen over 600,000 registered accounts!

We wanted to walk you through our thinking around how we’ll batch together updates to the Early Access in phases as we build towards global launch.

Details of the Axie Infinity Origin Phases and Upgrade Plans

There are four phases in the Axie Infinity Origin. With each of them featuring separate upgrade plans. According to the publication, players are already enjoying the first stage. However, the second stage will take effect in July 2022.

As mentioned above, this is the current level in the new ecosystem. This stage will feature major in-game balancing and improving decision-making. The aim is to make gameplay more fun and competitive.

Starting from July 2022, serious changes will begin to take effect. First off, there will be a full reset of all Runes and Charms. Following this action, players will collect NFT boost from the beginning of the progression system. By doing this, Axie can ascertain if the crafting process is working without an issue. In addition, it will also give users the opportunity to appreciate the progress made so far.

Furthermore, Axie will delete the MMR leaderboard date and restart it all over again. Thereby giving everyone the opportunity to challenge themselves and climb up the leaderboard again. There will also be a distribution of $AXS tokens to high ranking players. More importantly, the dev team is encouraging players who will participate in this stage to report any bugs they notice while gaming.

Upon the conclusion of Phase 2, there will be a removal of $SLP rewards from V2 and transferring them to Origin. The dev team will also introduce a mechanism to help users burn the above-mentioned token while crafting NFTs, Runes or Charms. You will also be able to mint the digital assets you create on the Ronin chain. After which you can proceed to gift or sell them on the market.

Like as stated in the second stage, there will also be a reset of the leaderboard and distribution of earnings to the winners. Runes and Charms from the previous level will also expire. This will be the new framework for subsequent Origin seasons. Although they will still be in your account, you will not be able to equip them. However, you can disenchant them for Moonshards. There may also be changes to the recipe cost for crafting, depending on the Data that Axie Infinity gathers.

The fourth phase will characterize the global launch of the first official season. Like stated earlier, it will follow the pattern from stage 3. MMR Leaderboard and Moonshards will be reset. All in-game assets will also expire.