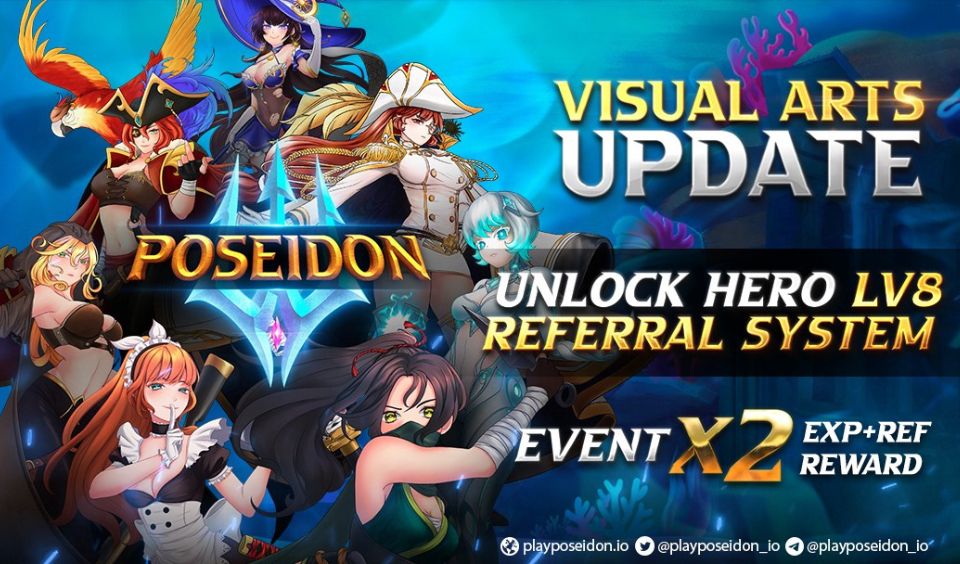 PlayPoseidon – a P2E NFT game is announcing the launch of the big update 2.0. This announcement comes after unveiling its roadmap for the third quarter of 2022. It is also the second major upgrade this year and focuses on improving the visual arts and referral systems.

Details of the PlayPoseidon Big Update 2.0

The PlayPoseidon big update 2.0 is set for release on the 16th of July. However, the exact time for the launch will be announced much later. Following the unveiling, all 9 NFT Heroes will undergo tremendous transformation and wear the Waifu manga-style look. In addition, players will now be able to see the unblocked view of the in-game character when they click the “Details” button.

In addition, users will be able to unlock the following animations across different levels:

On the other hand, the report did not reveal many details on the following cinematographies:

Speaking of the visual aspects, the game adds a “Bloody” effect to make gameplay look real. This will be especially when you can execute a one-shot kill against a sea monster. There will be a special explosion that will happen before a new SFX goes with it.

Referral System Update and Other Modifications

PlayPoseidon is looking to expand its network and grow its player base. To this effect, it will modify the referral system. From henceforth, every player can now become a referrer. All you need to do is create an account, generate their personalized code and use it to invite other people.

Going by the voting from the first proposal, the team will now enable the Curse of Poseidon. When this update goes live, any Hero that did not level up within the last 20 days will suffer the effect of this curse. However, the team will compensate for this decision’s drawback by doing regular GLT airdrops to affected persons.