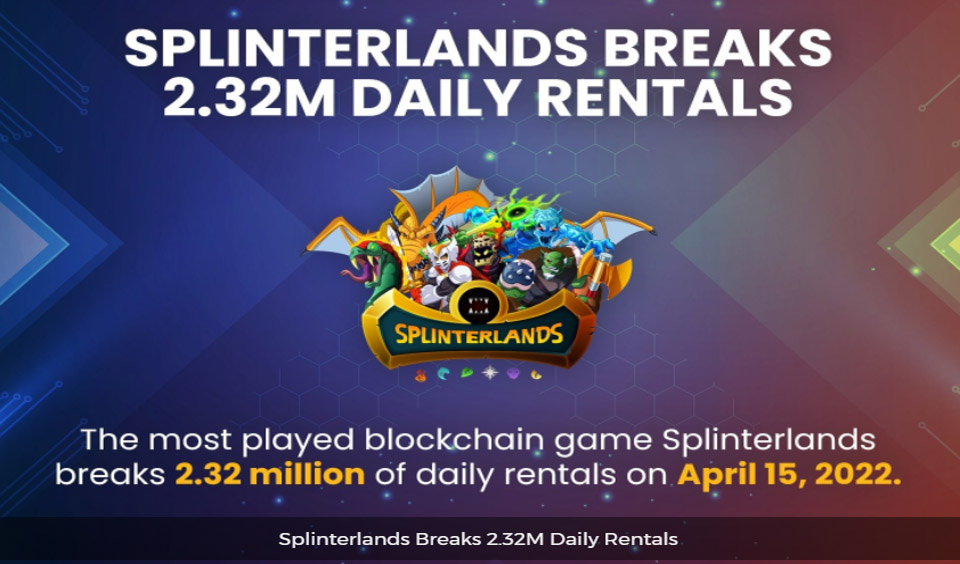 Since its launch, Card rentals have become a popular feature among players because it allows them to use any cards of their choice without owning or buying them. It also allows owners to earn revenue from renting out their digital cards to other users on the game platform.

Looks like the rental market got a little busy the other day! The 2.32 million active rentals kind of busy. That's a lot of cards being rented, sure, but that's also a lot of earning for card owners too:#splinterlands #sps #spt #hive #playtoearn #GameFi https://t.co/5q99e5yubG

Highlights of the Card Rental Markets

Splinterlands launched the rental markets for Non-fungible tokens (NFTs) in July 2021, giving players numerous opportunities to play and earn income without necessarily buying or owning cards. Players can rent cards at affordable rates, which makes the games accessible to all players.

Apart from card rentals, the platform also offers several other features, such as totems, packs, titles, land, and skins. All these are in-game features that players can use for their gaming adventures. Suffice to mention that the gaming platform recently revealed its plans to launch new validator nodes, which will generate about one billion dollar burn and rewards.

According to reports, players that started playing with $10 on the metaverse now have the value of $17,000 on their accounts. These earnings were generated from renting and exchanging cards to boost their set of cards and ranks.

How Splinterlands Game Metaverse has Performed So Far

According to the CEO of Splinterlands, Jesse Reich, the team is quite happy about attaining another milestone in its roadmap. The company recently revealed that it had achieved over two billion games played so far. Shortly after that, it achieved another significant milestone in the NFT rentals history.

It is worth mentioning that the metaverse ranks as the leading blockchain-based game on Dappradar, boasting hundreds of thousands of players playing the game daily. The Managing Partner of Blockchain Founder Fund, Aly Madhavji also referenced the achievement of the game platform.

According to him, the game platform has pioneered and delivered several innovations within the blockchain-based gaming industry and has continued to deliver the best rewards and perks to its users.

Splinterlands is a renowned play-to-earn blockchain-based game platform premised on the use of digital trading cards, which also doubled as NFTs. Players in the game metaverse hold NFTs cards and use the same to play in the battleground.