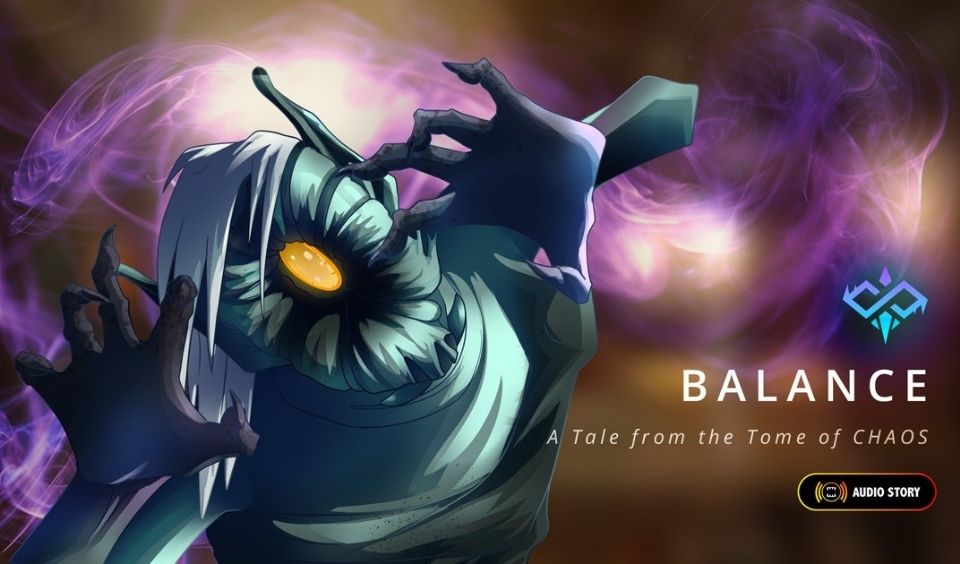 Following the various sales of its chaos legion packs, Splinterlands have been releasing teaser. Earlier on, it gave an insight of the Chaos Legion Corruption Teaser. Following this tale from the Tome of Chaos comes another tale, the Chaos Legion Lore Balance. This announcement was made public via the Splinterlands Peakd Page. Here is everything that you need to know about this new storyline from the Tome of Chaos.

Like in Chaos Legion Corruption, this Lore update also features a hero and her name is Delya. Chaos Legion: Balance begins with our hero questioning the need for training with weapons without using them. Deyla is deep in this thought while walking past the outside of the Xenith Temple. The same temple that took significant cost in resources and labor to construct. One reason for the high cost was the short time frame within which it was constructed.

Still deep in thoughts, her mind drifted to just hours ago. Memories of the burning village and soldiers in ebony uniform slaying everyone in their path. This was besides the bloated creatures, shadow figures and monsters with tentacles wreaking havoc on that small village. Despite the destruction, the Xenith Scale watched from a hill outside the village and did nothing. According to them, involving the chaos will tip the scale of Balance.

But Delya did not listen and decided to go against the decree of the monks. An elder Xenith was tasked with punishing her. Yarden – the elder took her to the library. While in the library, they were attacked by creatures who came through a portal. Before long, dozens of creatures came through it. Delya attaked one of the creatures but was quickly overwhelmed. It took the intervention of Yarden to dispose of the spider-like creature. A second portal soon appeared and the monsters soon trooped into the second portal.

So far, the Chaos Legion Lore seems to be quite fragmented. The different parts seem to start halfway and proceed almost instantly into battle scenes. There is no word from Splinterlands yet on how all these different parts will become one. However, it is expected that everything will snowball into one major storyline. It is also expected that there will be more tales from the Tome of Chaos.

It is also exciting to see how these various aspects of gameplay will use the packs from the card sale. Furthermore, it is also possible that these tales are sequential to each other, instead of separate parts of a comprehensive gameplay.